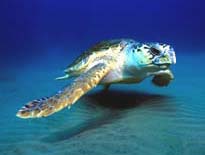 Indian turtle, along with tortoise and terrapin, belongs to the Testudines order of reptiles and the Chelonia crown group. The body of a turtle is covered with special bony or cartilaginous shell, which is developed from its ribs. One of the oldest reptile groups, the turtle of India was in existence even before lizards and snakes. Some of the species of the Indian turtles have become extinct, while a number of others have become highly endangered. Turtles are cold-blooded creatures i.e., their body temperature changes with their surroundings. The size of an Indian turtle tends to vary a lot, with marine turtles being bigger than land and freshwater ones.