Gharial crocodile counts amongst the largest crocodile species in the world. It is also one of two surviving members of the Gavialidae family. Ghavial Crocodiles of India have an elongated and narrow snout, which becomes thinner with age. There is a bulbous growth on the tip of an adult male's snout, known as 'ghara'. The length of a Gharial crocodile is somewhere around 5 to 6 meters. It has long and narrow jaws, which are razor-sharp.

Natural Habitat
Gharial crocodiles inhabit the calmer areas of the deep, fast moving Indian rivers. They do not move much on land and come outside water either to bask in the sun or to nest on the sandbanks of the rivers.

Geographical Range
The geographical range of the Gharial crocodile covers the countries of India, Bangladesh, Nepal and Pakistan. It used to inhabit Bhutan and Myanmar at one point of time, but is believed to have become almost extinct in these countries today. Gharial Crocodile is mainly found in the river systems of Indus, Brahmaputra, Ganges, Mahanadi, Kaladan and Ayeyarwady. 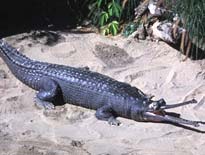 Adult gharials survive on a diet comprising mainly of fish. The young crocodiles, however, eat small invertebrates such as insects and larvae, along with small frogs. Some Gharial crocodiles have been known to eat dead animals also.

Mating Behavior
The mating season of the Gharial Crocodile stretches on from November to January and the nesting takes place in the months of March to May. The clutch size ranges between 30 to 50 eggs, which are deposited by the female into a hole in the ground. The eggs hatch after a period of approximately 90 days.

Status
The decade of 1970s saw the population of the Ghavial Crocodiles of India declining at a fast pace, taking the reptile to the brink of extinction. However, conservation efforts of the Indian environmentalists and the Indian government have led to a drastic improvement in the situation. Today, there are around are 9 protected areas in India for Gharial crocodiles, where both captive breeding and ranching operations are carried out.