Indian tortoise belongs to the Testudines Order and, like turtles, has a shell as its protective covering. It has both an endoskeleton as well as an exoskeleton. The length of a tortoise varies between a few centimeters and two meters. Infact, the growth of a tortoise depends upon the amount of food and water it eats. On an abundant supply of food, it may grow to quite a large size.

Behavior
The tortoise found in India is diurnal and, depending upon the ambient temperatures, may become crepuscular also. It is shy by nature and tends to avoid humans as far as possible. 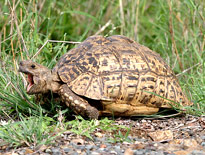 Female tortoise digs holes before laying eggs. The eggs, numbering somewhere around twelve, are laid in the holes itself. The incubation period lasts for 90 to 120 days and the hatchlings start eating solid food in about 3 to 7 days.

Types of Tortoise in India
The following types of tortoise can be found in the Indian subcontinent:

Three-keeled land Tortoise
This tortoise mainly lives in the Ganges and Brahmaputra drainages of northeastern India.