India has been a very religious country since time immemorial. The birth and growth of civilization paved the way for different religions to spring up. In pre-historic times, there were no religions as such but people worshipped various forces of nature like the Sun, Moon, Thunder, etc. As the society grew, complex religious practices came into existence. With the emergence of the priestly class, there were a multitude of changes in the religions in India.

Every region had its own religious practice and belief. The Holy Scriptures like Vedas, Upanishads and epics talk about the ancient religious practices of India. They talk about elaborate "Yagnas", sacrifices, importance of fire in a ritual, etc. that were an integral part of the religious practices. Hinduism was one of the earliest religions to be founded in India and it is also considered to be one of the world's oldest religions. Even today, Hinduism has the maximum number of followers in India and the beliefs and traditions have not changed since ancient times. 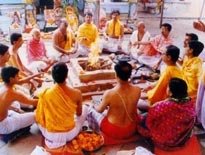