Indian Weddings Home Remedies Ayurveda Vastu Yoga Literature
The Gupta Empire / Dynasty has quite a lot of significance in the history of India. Read about the Gupta period and their kingdom.
Home : History : Ancient History of India : Gupta Empire

The Gupta period marks an important phase in the history of ancient India. The long and efficient rule of the Guptas made a huge impact on the political, social and cultural spheres. Though the Gupta Empire was not as widespread as the Mauryan Empire was in India, yet the Gupta dynasty was successful in creating an empire that is significant in the history of India. The Gupta Period is also popularly known as the Golden Age of India and for the right reasons. The lifestyle and culture of the Gupta dynasty is known through the availability of various ancient coins, scriptures, inscriptions, texts, etc. belonging to that era.

The rulers of the Gupta Empire were efficient administrators who knew how to govern with a firm hand without being despotic. During this age, art and education flourished and many great discoveries were made in these fields. Aryabhatta and Varahamihira, the two great mathematicians contributed much during this period in the field of Vedic Mathematics. Aryabhatta estimated the value of "Pi" to the fourth decimal place. Algebra was developed to a great extent and the concepts of zero and infinity were found. The symbols of numbers 1 to 9 were devised which was a great contribution in mathematics. These symbols came to be known as Hindu Arabic numerals later when the Arabs too adopted them. 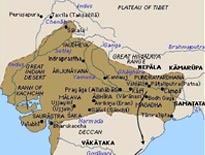 The Gupta Age is also known for its advances in astronomy. During the reign of the Gupta rulers, astronomers and philosophers proposed the theory that the earth was not flat but round. The theory of gravity was also propounded during this time. The astronomers made a breakthrough when they found out the different planets and started to make horoscopes based on the planetary positions. The field of medicine also advanced a lot during this time and doctors used to perform operations even during that era. Since so many discoveries and advances were made in arts, medicine, literature and science during Gupta period, it has been called the Golden Age of India.