Ancient India had very simple forms of worshipping. Idol worship was unheard of and there were no such Gods & Goddesses during the beginning phase of civilization in ancient India. Earlier, the various forces of nature were worshipped as the supreme power since they were unheard of. Natural elements like the Sun, Moon, Rain, Thunder, etc. were worshipped during the time civilization began. People were scared of these natural elements as there were no rational explanations for these natural elements. Nature was thus, the God/Goddess in ancient India.

Nature and its elements were regarded as female and were worshipped in the form of Mother Nature. Early archaeological excavations reveal a figurine shaped like a woman who was most likely to be worshipped as the main Goddess. The people in ancient India continued to worship a female form till the time the Aryans invaded the Indus Valley. They introduced a patriarchal form of worship and idol worship came into vogue. However, with the advent of Hinduism and inter racial marriages, the Aryans began to return to worshipping ancient Goddesses. 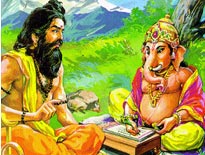 As time passed, the Vedas and other important scriptures were formed and much more Gods and Goddesses were worshipped. It is estimated that during the Vedic Period, there were 3000 Gods and Goddesses that were worshipped! The King of all Gods was Indra, who had the power to destroy cities with rain and thunder. The creator was known as Brahma, the preserver was known as Vishnu and the destroyer was known as Shiva. The Sun God was also much respected and worshipped. The spiritual world and beliefs were also revived and people started to believe in evil and good spirits.