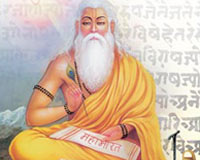 The life history of Ved Vyas is an interesting one. The author of the great epic Mahabharata, Ved Vyas was the first and greatest acharya of Sanatan Dharma. He is responsible for classifying the four Vedas, wrote the 18 Puranas and recited the great Mahabharata. In fact, the Mahabharata is often called as the fifth Veda. The most important and the most glorified section is the Bhagwad Gita, the lesson recited to Arjuna by Lord Krishna on the battlefield. Apart from the Mahabharata, he also wrote the Brahmasootra, one of his shortest theologies on Hindu philosophy. It is said that Ved Vyas is immortal and he never died. Seeing the widespread violence in today's times, he is said to have retreated into some remote village in Northern India. The life of Ved Vyas is an example to all in the modern times on how to be selfless and devote oneself entirely to Lord in order to attain Nirvana. To know more about Vyas, continue to read this insightful biography on him.

Personal Life
He is also known as Krishna Dvaipayana. Around some 5000 years ago, he was born in Damauli of Tanahi district, which is now in Nepal. The ancient cave that he wrote Mahabharata in still exists in Nepal. His father was Parashar Rishi, a sage and his mother was Satyavati. He taught the Vedas to his pupils with ardent devotion and dedication. It is said that Mahabharata is the 18th Puran that was written by Ved Vyas. He fathered four famous sons, Pandu, Dhritarashtra, Vidur and Sukhdev. Ved Vyas received knowledge from great sages like Vasudeva and Sanakadik. He described that the most important goal in one's life is to attain Narayana or the Divine Supreme.

Major Work
Mahabharata: There is a cameo of Ved Vyasa himself in Mahabharata. He is considered as a part-incarnation of Lord Vishnu. It is said that he came to the earth in Dwaparyuga to put all the Vedic knowledge in this universe in the form of written words and make it available to everyone. Before Ved Vyasa the Vedic knowledge only existed in the form of spoken words. He was the grandfather to Pandavas and Kauravas. He is called Ved Vyasa because he had split the original version of Vedas into four parts; Ved Vyasa literally means 'the splitter of Vedas'. It was because Ved Vyasa had split the Vedas that it became easy for people to understand it. This is how the divine knowledge was made available to everyone. It is still not clearly known whether Ved Vyasa had split the Vedas all by himself or if he did with the help of a group of scholars.

In Mahabharata, Vyasa's mother marries the king of Hastinapur and gives birth to two sons. Both the sons die and their wives are left with no children. She asks him to impregnate both the wives. Vyasa agrees to impregnate Amba and Ambika. He tells these girls to come in close proximity to him but alone. It was Ambika's turn first to go close to him and out to shyness she closes her eyes. Vyasa declares that the baby would be born blind--this child was called Dhritarashtra. Then it was Amba's turn. Although she was instructed by Ambalika to relax and calm herself down. But she was very nervous and her face becomes pale out of fear. Vyasa declares that the baby born out of this will be severely anemic and will certainly not be capable of running a kingdom--this was Pandu. This leads to the third attempt to make a healthy child but Amba and Ambika were so scared now that they sent a servant girl instead. This maid was confident and she gets impregnated with a healthy child--this was Vidura. He also had another son called Suka from sage Jabali's daughter called Pinjala. It is said that Ved Vyasa asked Lord Ganesha himself to help him in compilation of Mahabharata. But Ganesha had put one condition on him; he said that he will write Mahabharata for him if only he will narrate it to him without a single pause. To supersede this condition, Vyasa put another condition on him asking him to understand the verses even before he has recited them. This is how Mahabharata was written, Ved Vyasa narrated all the Upanishads and 18 Puranas continuously to Lord Ganesha.

Buddhism: There is also mention of Ved Vyasa in Buddhism. In the two of their Jataka tales called Kanha-dipayana and Ghata. He appeared as a Bodhisattva in Kanha-dipayana, which has no connection with his Hindu Vedic works and in Ghata Jakata his role has a close relation to Mahabharata. In Ghata, the Vrishnis plays a joke on Ved Vyasa to put his clairvoyance powers to test. They dress up a boy as a woman by tying a pillow to his belly. Then they took him to Vyasa and asked him if he could tell them when the baby is due. He tells then that the person in front of him will give birth to a knot of acaria wood and will destroy Vaasudeva's race. They kill him in the end but his divination came true.