Abhijnanasakuntalam is a beautiful tale of love and romance, the name literally meaning 'Of Sakuntala who is recognized by a token'. Written by one of the greatest poets of India, Sakuntalam is synonymous with its author, Kalidasa. Abhijnanasakuntalam is the first Indian play ever to be translated into western languages. It is for the very first time translated in English language by Sir William Jones in the year 1789. Later to this, there were at least 46 translations of this play by Kalidasa in 12 different European languages. To know more about this beautiful play called Abhijnanasakuntalam, continue to read this insightful article on it.

Synopsis
Long ago, the powerful sage Viswamitra, who lived a life of strong austerities, was drawn in a deep meditation. Fearing that he might gain more power than the gods, Lord Indra sent one of his most gorgeous heavenly damsels, Menaka to earth to disturb his devotions. She succeeded in seducing him and together they begot a beautiful daughter. Infuriated at the loss of his chastity, Viswamitra turned down Menaka and her daughter. Knowing that she can't take the child with her to the heaven, Menaka left the newborn infant in the forest.

As fate would have it, Sage Kanava happened to pass by that forest where he spotted the newborn child, surrounded by Shakunta birds. Taken by kindness, he decides to take the child home and names her 'Sakuntala', which means one fed by Shakunta birds.

Sakuntala grows up to be a beautiful young lady just like her mother Menaka. One day, King Dushyant, while returning from a deer hunt, happens to stop by the hermit's cottage. 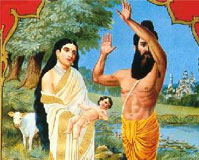 There he sees Sakuntala engaged in a friendly banter with her friends and immediately falls for her. In the absence of the sage, they secretly marry in the ceremony of "Gandharva Vivaha" with Mother Nature as the witness.

After some days, the King gets news of unrest in his city and is summoned to return. He leaves half-heartedly, but promises to return soon and take his beloved with him. As a token of love, he gives her a signet ring and promises to send an envoy to escort her to the palace.

One day, sage Durvasa, infamous for his mercurial anger, stops by the hut for hospitality. Lost in her love thoughts, Sakuntala fails to acknowledge his presence. This infuriates the temperamental sage and he censures Sakuntala, cursing that the one whom she is thinking about will forget her. Sakuntala begs for mercy and explains her situation. On the plea of Sakuntala and her friends, the sage relents and says that if the king sees any significant souvenir that he gave her, he will remember everything.

After months of waiting, when she fails to hear anything from the king, Sage Kanava arranges for the visit of Sakuntala to the royal court of King Dushyant. On her way, she stops by a lake to drink water and unfortunately the ring slips out of her finger and a fish swallows it. She reaches the royal palace, but Dushyant fails to recognize her because of the curse. She then remembers the ring but realizes that she has lost it somewhere. Dejected, she returns back to the forest. After sometime, an angler finds the ring in the stomach of a fish. He immediately takes it to the king, who on seeing the ring recalls everything and rushes to the hermitage to meet Sakuntala. There they reunite and later Sakuntala gives birth to a son, Bharath, after whom India begets her name.

Connection With Mahabharata
The version of Abhijinanasakuntalam in the famous epic of Mahabharata is slightly different to the original version. In the Mahabharata version, Sakuntala had to stay apart from her husband, king Dushyanta, for a very long time. It is only when their son Bharata was born that Dushyanta found him playing in the forest with a couple of lion cubs, opening their muth with his bare hands, trying to count their teeth. Seeing a little boy playing with such courage amongst lions, Dushyanta becomes curious about the boy and asks him about his parents. The little boy then takes him to Kanva rishi's ashram where Dushyant meets Sakuntala and remembers everything. This fills up Dushyant's heart with warmth and joy; he gets reunited with his long lost family and takes his wife and his son back home in Hastinapur. Bharata is known to be the ancestor of Kauravas and Pandavas, who partook in the epic war of Mahabharata. It is said that it is after the name of Bharata that India took its name. India was known as 'Bharatadesham' which precisely means the land of Bharata. Although, this version is more popular mythology wise but Kalidasa's original version is still considered to be the standard one.