The longest Sanskrit epic ever written, Mahabharata has a collection of more than 74,000 verses, divided into 18 books. The Mahabharata story is much revered in India and basically among the Hindus. The Mahabharata contains the Bhagawad Gita, the famous gospel of duty that was taught to the great warrior, Arjuna by Lord Krishna. The Mahabharata dwells on the aspect of the important goals of a human being in his mortal life. The epic aims at making people realize the relation between the individual and the society and how they both are inter dependent on each other. Read on further a summary of Mahabharata, the greatest epic ever. To get an in-depth knowledge on Mahabharata, continue to read this insightful article on it.

Synopsis
The epic revolves around the struggle for the throne of the kingdom of Hastinapura. The struggle is between two branches of the same family, the Kauravas and Pandavas. The Kauravas were collectively the hundred sons of the blind king Dhritarashtra and the Pandavas were the five sons of Pandu, who died of a curse. 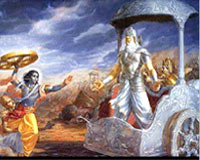 The five brothers named Yudhisthira (eldest son), Arjuna, Bheema, Nakula and Sahdeva were always obedient and dutiful, which made them the most loved in the kingdom. Each of the Pandavas had a special virtue in them that made them stand apart from the rest of the world. This made the Kauravas hate them and they planned many devious ways to get rid of them.

As time went by, the Pandavas got married and shared a common wife named Draupadi. The Kauravas got even more enraged and challenged the Pandavas to a game of gamble. The Pandavas lost and were banished from the kingdom for an exile of 12 years. There was a condition that if they were recognized by the end of 12 years, they would have to begin from scratch.

One of the most important and dramatic character in this epic is Lord Krishna. He was the sole advisor, guide and true friend of the Pandavas and helped them in each and every difficulty in their exile. He is said to be the incarnation of God, who came to earth in human form to relieve the world of evil people and restore faith in his devotees. During the great battle of Kurukshetra fought between the Kauravas and the Pandavas, Lord Krishna took upon himself the duty of driving Arjuna's chariot. He imparted the valuable and practical lessons of the Bhagawad Gita, a text of the conversation between Lord Krishna and Arjuna, where Lord Krishna shows Arjuna a glimpse of his majestic divine form.

The Pandavas won the battle and ruled over Hastinapura for a number of years. It is said that Dhritarashtra and his wife retired into the forest to lead a stress-free life of an ascetic and Krishna left after around thirty six years after the battle took place. When the Pandavas realized that it was time to leave this earth, they all set out on a journey towards the North on foot. It is said that the gates of heaven opened on the northern horizon. One by one they dropped dead, until Yudhisthira finally reached the gates of heaven to be united once again with his brothers and wife.

Translations & Adaptations
Kisari Mohan Ganguli, an Indian translator, in the year between 1883 and 1896 translated the entire text of Mahabharata into English language. It is considered to be the most accurate translation of Mahabharata into English and is popular till date. It is accessible to each and everyone as it is available online and so is another version by Pratap Chandra Roy. University of Chicago press is in the process of publishing a translated version of Mahabharata, along with a Critical Edition. This process was initiated by a well known Indologist called J. B. A. van Buitenen. But after the sad demise of Buitenen, this task has gone under the supervision of learned people like: D. Gitomer from DePaul University, J. L. Fitzgerald from Brwon University and Wendy Doniger from the University of Chicago.

Many well known writers have worked on the condensed version of Mahabharata and some of them even changed it into novelistic prose. These writers were: Romesh C. Dutt, R.K. Narayan, Ramesh Menon, Sharon Mass, C. Rajagopalachari, k. M. Munshi etc. There exist some modern interpretations of Mahabharta. S. Ramakrishnan, a Tamil writer, had written a famous book which was based on Mahabharata called Uba Paandavam, which is a non-linear narration of the epic story. Another book called Parva, written by the Kannada writer S.L. Bhyrappa, digs deep into the social, ethical and cultural aspects of the regions mentioned in Mahbharata and correlates the ancient epic with the existing situation of its geographica regions. Another book by a Malayalam writer M.T. Vasudevan Nair called Randamoozlam, narrates the story of Mahabharata from the point of view of Bhima. Shashi Tharoor's The Great Indian Novel has greatly used Mahabharata's context to represent the true literary, philosophical and political situation of the post-independent India.