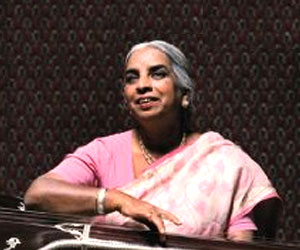 Born - 8 May 1929
Achievements - She is an eminent Indian classical vocalist representing the Banaras gharana. She is proficient singers of various different genres of Hindustani vocal music like Khyal, Thumri, Dadra, Chaiti and Kajari. But her forte lies in singing the Poorab and Thumri. She is, thus, called the Queen of Thumri.

Girija Devi is a senior and renowned Indian female classical vocalist, who represents the Banaras Gharana of singers. Born on 8 May 1929 in the Indian state of Uttar Pradesh, Girija Devi has been gifted with the most mellifluous voice. She is proficient singers of various different genres of Hindustani vocal music like Khyal, Thumri, Dadra, Chaiti and Kajari. But her forte lies in singing the Poorab and Thumri and because of this, Girija Devi is lovingly said that she's the last living queen of thumri.

Read on further here about the biography of Girija Devi. It was Girija Devi's father, Ramdeo Rai, who was a Zaminadar by profession, who inculcated the interest of classical Indian music into his daughter. And it was at the tender age of five that Girija Devi began taking lessons in music from teachers like Pandit Sarju Prasad Mishra and Shrichand Mishra. Girija Devi's very first music recital took place in the year 1949 from the Allahabad branch of the All India Radio.

After this, there was another onstage performance at Arrah in the state of Bihar. And both singing performances of Girija Devi were hugely praised. Throughout her glorious singing career, Girija Devi has performed live at numerous regions in India as well as in other parts of the world like at the United States of America, the former USSR and various other European countries. Girija Devi is also an accomplished composer, who has composed a lot of bandishes and thumris.

Girija Devi's a genius in her sphere of Indian classical vocal rendition. This fact has further highlighted by the numerous prestigious awards that were conferred to her. For instance, she was given the Padma Shree in the year 1972 and the Padma Bhushan in 1989, which are among the highest civilian awards of India. The Tansen award named after Tansen, who was one of the nine gems in the court of Emperor Akhbar, was also conferred to Girija Devi. She has also served as member of many important committees relating to music in India.