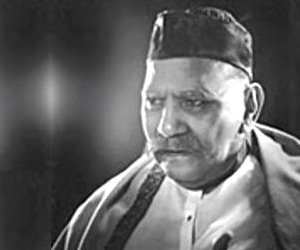 Born - 1902
Died - 1968
Achievements - Belonging from the illustrious Patiala Gharana, Ustad Bade Ghulam Ali Khan was considered the king of Hindustani classical music genre. Infact, the people were so much in love with his voice that many called him the Tansen of the 20th century.

Read on this biography to know more about Ustad Bade Ghulam Ali Khan. People were so much in love with his voice that many called him the Tansen of the 20th century. There's hardly a doubt that he is the most adept of all singers of his time. At different points of time, he lived at different places like Lahore, Mumbai, Kolkata and Hyderabad. Even in the present times, Bade Ghulam Ali Khan remains the motivation behind en entire generation of top-ranking vocalists in India and Pakistan.

When India was divided in the year 1947, Khan went back to his homeland in Pakistan. But he returned after sometime to live in India again and even acquired an Indian citizenship in the year 1957. Bade Ghulam Ali Khan always turned down the offer to sing for films throughout the course of his life history. But at the end, he finally agreed to lend his voice to two songs in the 1960 movie Mughal-e-Azam. In this film made by director Naushad, his voice was made to represent that of Tansen's.

Bade Ghulam Ali Khan died at Hyderabad in the year 1968 after a prolonged illness, which had left him partially paralyzed during his concluding years. But still he continued to sing in public performances with the help of his son, Munawar Ali Khan. In the present times, the Bade Ghulam Ali Khan Yaadgar Sabha set up by his disciple Malti Gilani is playing pivotal role in keeping the memory of the Ustad alive.