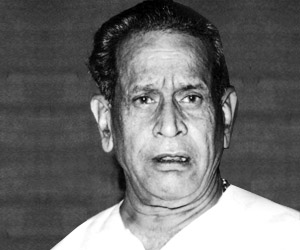 Pandit Bhimsen Joshi was the numero uno amongst Hindustani classical vocalists. He was considered as the leading light of the Kirana gharana. Bhimsen Joshi is renowned for his unique style and mastery over ragas.

Bhimsen Joshi was born in Gadag (Karnataka) on February 14, 1922. His father was a schoolmaster. Bhimsen Joshi developed passion for music from early childhood. As a child, he was deeply moved by a recording of Abdul Karim Khan, the founder father of the ' Kirana gharana'. He left home in 1932 in search of a guru. He wandered for two years and traveled to Bijapur, Pune, and Gwalior. He tutored under Ustad Hafiz Ali Khan in Gwalior. He also went to Calcutta and Punjab before returning home.

In 1936, Bhimsen Joshi started his rigorous training under Sawai Gandharva (Pandit Rambhan Kundgolkar), the eminent Khayal singer and student of Abdul Karim Khan at Kundgol, near Gadag. He learnt the basics of Khayal singing and was under Sawai Gandharva's tutelage for several years. Pandit Bhimsen Joshi enriched the Kirana gharana by adding his own distinctive style and adapting characteristics from other gharanas to create a unique vocal idiom. He has improvised and combined ragas to create new ragas like the Kalashri and LalitBhatiyar.

Pandit Bhimsen Joshi was an exponent of khayal style and rendered majestic thumris and bhajans. He gave his first public concert in Pune in January 1946 to mark the shashtyabdipoorti (60th birthday) of his guru Sawai Gandharva. Some of the famous numbers sung by Bhimsen Joshi include 'Piya milan ki aas', 'Jo bhaje hari ko sada', and 'Mile sur mera tumhara'.