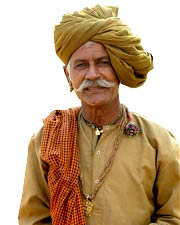 Indian turban is a headdress consisting of long scarf-like single piece of cloth, wound around the head. It is worn by a certain section of men in India and is very much a part of the country's culture and tradition. The mention of turban in the sacred Indian scriptures, like the Vedas, proves that it was a crucial part of Indian men's costume, even during Vedic times. Though the popularity of the head turban has somewhat waned with the modernization of man, yet even today, whenever it's donned, it's done so with a lot of dignity and honor.

In the colorful Indian state of Rajasthan, the people of the Rajput community wear very prominent, majestic-looking, turbans. In the Hindi language, a turban is called a Pagri or Safa and you will find many designs and styles of the Pagdi being worn by the Rajasthanis. These two factors are important because they signify the social status of the turban wearer. For instance, the turban of a person belonging from the aristocratic class may be made of silk cloth, whereas a peasant may simply tie his towel around his head as turban.

The wearing of the turban costume in India has many connotations. In old days, the long strip of the turban cloth was soaked in water at a well and then wrapped around the head. The layers of wet cloth provided the much-needed relief from the scorching sun outside. Also, it was very handy in fending off the desert sand and keeping the hair neat and tidy. Most importantly, a pagri is a symbol of dignity in present times. In India, people of different community may wear their turban differently.

It is closely associated with the Sikh faith in India. Men of this community undergo a type of baptism to join the Khalsa and are, thus, debarred from cutting their hair the whole life. The Sikh men are, thus, required to wear a turban to manage their long hair. The turban cloth is usually five meters, or less, in length and the turban wearers wind it anew every time they don the headdress. Though Sikh women joining the Khalsa are not really required to wear the turban, yet some of them do so. The Punjabi name for turban is Dastar.