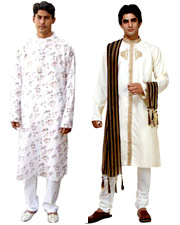 Kurta-Pajama, consisting of two pieces of garments, is one of the basic clothing of the Indian men. The first garment is a kurta that is like a loose long shirt almost reaching the knees, whereas the second one is the pajama or pyjama, which is a lightweight drawstring trouser. Though mostly worn on formal occasions, kurta pajama can also be worn casually. Infact, there are many Indian men who wear this dress as their sleepwear.

The term 'pyjama' crept into the English language from Hindustani, a language from which Urdu and Hindi originated. The word originally derives from the Persian word 'Payjama' meaning 'leg garment'. It was due to the British colonialization of India that the term 'pajama' and the dress spread to other parts of the world. In India, one will often find politicians wearing white starched Kurta Pajama. As a tradition, civilians wear this dress during festivities and other special occasions like holi, religious ceremony, etc.

Only soft material fabrics are used for making kurta pajama as it is supposed to be a comfortable loose fitting dress. Though good quality cotton is the most common material used for making kurta pajama, other fabrics like silk and satin are also used. Normally adults prefer wearing the kurta and pajama in neutral shades, as they give a very dignified look. Children, on the other hand, wear this dress in varied hues and patterns. Kolhapuri chappals are the most preferred footwear for this type of attire.