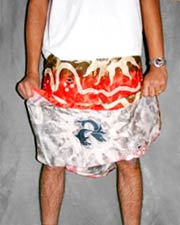 Perhaps no other Indian attire is as simple, or less cumbersome, as the lungi, which is a garment worn around the waist. The origin of the traditional lungi can be traced to South India, though the dress is now popular among several other communities of Asia also. Lungi is generally woven from cotton and is available in many designs, patterns and colors. However, the most commonly worn are those with checks or the ones in a single dark hue.

No matter what the color and design of the lungi, there is always a thin line or stripe running horizontally at the top and bottom of this garment. A lungi is different from a dhoti that is a linear-like sheet, because it is sewn into a circle like a skirt. Though it is normally worn by men in India, at some places, you will find the women folk wearing it too. Depending upon the occasion, a lungi is tied or fastened in different styles.

For everyday wear, people simply tie a double knot on their lungi as it is least likely to come undone. Lungi is a popular form of garment in south India, where the severe heat and humidity makes donning trousers unsuitable. In Kerala, it is worn as a casual dress by both men and women, especially by those belonging to the class of physical laborers. A lungi in plain white hue is called a Mundu. For ceremonial occasions like weddings, Mundus often bear golden embroidery, known as kasavu.