Indian Weddings Home Remedies Ayurveda Vastu Yoga Literature
The Dhoti is the most traditional Indian dress for men. You get here relevant information on this style of clothing…
Home : Indian Clothing : Dhoti 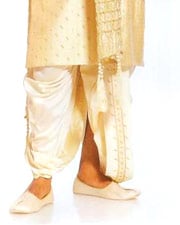 The dhoti is the most traditional of all dresses for men in India. If you ever see photographs of Indian men before, during and soon-after the independence era, you will find many of them wearing the dhoti dress teemed with a kurta. Earlier the dhoti used to be a casual daily wear of the Indian men. But with modernization of our society, it steadily relegated to being just formal clothing in India, though there are still people especially in the rural belts for whom dhoti is the regular clothing attire.

The dhoti is a rectangular piece of unstitched cloth about five yards long, wrapped about the waist and the legs and knotted at the waist. It is known by different names like Laacha in Punjabi, Mundu in Malayalam, Dhuti in Bangla, Veshti in Tamil, Pancha in Telugu, Dhotar in Marathi and Panche in Kannada. In north India, the dhoti is worn in combination with a kurta top, which a long loose fitting shirt. The dhoti kurta dress is called dhuti panjabi in east India. This dhoti dress is different from a lungi as the cloth of the latter is stitched to form a circle.

The dhoti dress may have lost its popularity in modern day India, but it is still worn with a lot of dignity by the many prominent senior citizens, politicians, musicians, dancers and others. Apart from being worn on all important government and family occasions, the dhoti kurta is also allowed to be donned in post upscale clubs, which normally stipulate very stern dress code for guests. The one prominent Indian citizen who gets all credit for popularizing this attire beyond the Indian borders is Mahatma Gandhi.

There are various styles of wearing the Indian dhoti. For instance, the Bengali men usually make pleats in their dhoti. In south India, the dhoti wearers added the angavastram to their attire, which is an extra piece of unstitched cloth kept on the shoulders. For convenience purpose, many south Indian men fold their dhoti in half and tuck it at the waist so that it reaches only till the knees. In certain Indian communities in Rajasthan, wearing the dhoti-kurta is mandatory.