This biography gives a glimpse into the life of Maharishi Valmiki. Read on to know more about life history of Valmiki.
Home : Spirituality : Indian Gurus : Valmiki 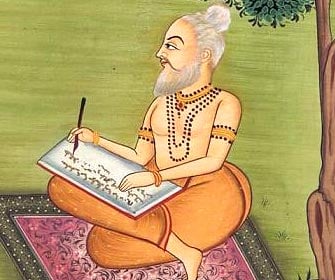 About Valmiki
Maharishi (the great sage) claims the distinction of being the author of the holy epic 'Ramayana', consisting of 24,000 verses. He is also believed to be the author of Yoga Vasistha, a text that elaborates on a range of philosophical issues. There are different versions regarding the time period and life of Valmiki. The Valmiki Ramayana is believed to be dated variously from the period 500 BC to 100BC. But at the same time Valmiki is also said to be the contemporary of Lord Rama. Sita took refuge in her Ashram where Lava and Kusa were born. Against this backdrop, the period of Valmiki is likely to date back to thousand of years.

There is much controversy regarding the life of Maharishi Valmiki. There is a age old belief th;at before turning into a sage Valmiki was a highway robber called Ratnakara. This widely accepted story has been explained in detail below. But a judgement given by Justice Rajive Bhalla of the Punjab and Haryana High Court in the year 2010 could change an age-old belief about Maharsihi Valmiki. Justice Bhalla quoted the research done by the head of the Maharishi Valmiki Chair of the Punjabi University, Patiala, Manjula Sehdev, and said that,"actual facts appear to be lost in the mists of antiquity." The judge stated the salient features of the research, saying that "from Vedic literature up to 9th century AD, there is no reference as such that Maharishi Valmiki led a life of a dacoit or highwayman." It was also stated that in his own work 'Ramayana', Valmiki is called Bhagwan, Muni, Rishi and Maharishi and no reference of his highwaymanship is available there.

Early Life
Maharishi Valmiki was born as Ratnakara to sage Prachetasa. At a very young age, Ratnakara went into the forest and got lost. A hunter, who was passing by, saw Ratnakara and took him under his own care. Under the love and care of his foster parents, Ratnakara forgot his original parents. Under his father's guidance, Ratnakara turned out to be an excellent hunter. As he approached marriageable age, Ratnakara was married to a beautiful girl from hunter's family.

Turning into a Robber
As his family grew larger, Ratnakara found it next to impossible to feed them. As a result, he took to robbery and began looting people passing from one village to another.

Meeting with Narada and Transformation
One day, the great sage Narada, while passing through the jungle, was attacked by Ratnakara. As Narada played his Veena and sang praises of the Lord, he saw a transformation coming over Ratnakara. Then, he asked Ratnakara whether the family, for whom he was robbing others, will partake in his sins also. Ratnakara went to ask the same question to his family and on being refused by all his family members, he went back to sage Narada. Narada taught him the sacred name of 'Rama' and asked him to sit in meditation, chanting the name of Rama, till the time Narada came back.

Ratnakara followed the instructions and kept sitting in a meditative posture for years, during which his body got completely covered by an anthill. At last, Narada came to see him and removed all the anthills from his body. Then, he told Ratnakara that his tapasya (meditation) paid off and the God was pleased with him. Ratnakara was bestowed with the honor of a Brahmarshi and given the name of Valmiki, since he was reborn from the Valmika (the ant-hill). Sage Valmiki founded his ashram at the banks of River Ganga.

Receiving Lord Rama
One day, Valmiki had the fortuity of receiving Lord Rama, His wife Sita and brother Lakshman at his ashram. On Valmiki's suggestion, Lord Rama built his hut on Chitrakuta hill, near the ashram.

Writing Ramayana
Narada visited Maharishi Valmiki in his ashram once and there, he narrated the story of Lord Rama. Thereafter he received a vision from Brahma in which the Lord instructed him to write Ramayana in slokas, which the sage readily followed.