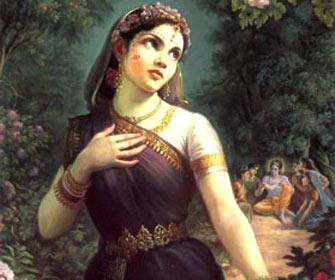 Goddess Radha is a well-known deity in Hindu Mythology. She is also known as Radharani in the northern part of India. For her deep devotion towards Krishna, Radha is usually depicted with Krishna. Radha is sometimes considered as the incarnation of Goddess Lakshmi, the consort of Lord Vishnu.

Radha- the Embodiment of Love
The love story of Radha-Krishna has become a legend in the Hindu mythology. The story is believed to have taken place in the Dwapar Yuga, when both of them took birth in this world. Radha was a cowherdess, who through her beauty and charm captivated the heart of Lord Krishna and became his beloved goddess. Lord Krishna is considered to be the incarnation of Lord Vishnu, whose birth was predestined.

Krishna took avatar in order to slay the demon king Kansa and to spread happiness. During his life, Krishna met Radha and they fell in love with each other. Krishna had a motive behind his life i.e. to kill Kansa and to fulfill this mission; he had to face many problems. But, Radha with her intense affection and steady devotion helped Krishna to overcome the problems.

Radha - Devotee of Krishna
Radha represents the true devotee, both in the form of male and female. And Lord Krishna represents the divine. Intense love of Radha for Krishna symbolizes each devotee's passionate longing for ultimate unification with God. With her utmost devotion towards her lord, she became the supreme devotee of Lord Krishna. Today people remember Radha-Krishna in a single term. However, Radha was not the consort of Lord Krishna, but their love had united them for ever. Radha is an inescapable part of Krishna. Without Radha, Krishna doesn't mean anything and without Krishna, Radha is nothing.

Radha - The Goddess
Radha has attained the status of goddess in the Hindu Religion. Radha's immense love and dedication towards lord Krishna got her this position, which she truly deserves. Radha is the heavenly queen of Krishna's celestial world. Today, Radha is worshipped like any other goddesses in temples.

Radha Ashtami
Birthday of Radha is celebrated as Radhaashtami throughout the country and especially in the north, with full devotion and joy. Radha Ashtami is observed after 15 days of Janmashtami, which is celebrated as the birthday of Lord Krishna. Radharani's birthday is the sacred eighth day of the month of Bhadrapada (August-September).