Goddess Parvati is the consort of Lord Shiva in the Hindu Mythology. Parvati is one of the many forms of "Shakti".
Home : Spirituality : Hindu Goddesses : Parvati 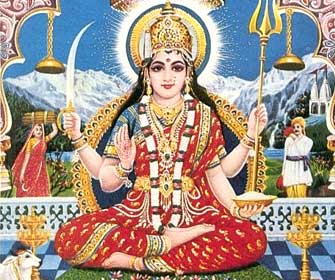 Goddess Parvati
Parvati is a well known goddess in the Hindu mythology. Goddess Parvati is the divine consort of Lord Shiva, the trinity god. Parvati is also considered as a representation of Shakti or Durga, but the gentle aspect of that goddess not the fierce one. Maa Parvati is beautifully presented in the Hindu Literature as being beautiful, as a mediator in the conflicts of heaven, as a daughter of the Great Himalayan Mountains and as the divine sister of Goddess Ganga.

The divine motherly love of Parvati is visible with her two children Ganpati and Kartikay. According to the Hindu Belief, Parvati is the second consort of Shiva, the Hindu God of destruction and rejuvenation. Although, she is not different from Dakshayani (Sati), being the reincarnation of that former consort of Lord Shiva.

Parvati - Form of Shakti
Parvati is believed to be one of the many forms of "Shakti". People take her to be the divine sister of Maa Kali, Maa Lakshmi, Maa Saraswati, Durga and all other forms of Shakti. Durga (Goddess beyond reach) and Kali (Goddess of Destruction) are the two fierce but very powerful forms of Parvati.

Goddess Parvati - Other Names
The word Parvati has been derived from a Sanskrit word "Parvat" meaning mountain. So, "Parvati" means "she of the mountains" and suggests that Parvati is the daughter of Himavat (the personification of the Himalayas) and the apsara (fairy) Mena. Lalita, Uma, Gauri, Kali, Durga, Haimavati etc are the other names for Parvati. Amba is the other name of Parvati being the mother of the universe and Ambika, being the 'mother'. As Lalita, she represents the aspect of beauty and magnificence. Lalita Saharanama contains a thousand of her names.

Parvati - Her Symbolism
Goddess Parvati symbolizes noble virtues admired by the Hindu religion. Parvati is the better half of Lord Shiva, the most innocent and the fiercest god in Hindu tradition. The couple together symbolizes both power of renunciation and asceticism and the blessings of marital felicity. There are legends behind the marriage of lord Shiva and Parvati, being a devotee of Shiv-Shambhu. Parvati did a lot of tap in order to get Shiva as her soul mate. Parvati's dedication was really true which made Lord Shiva to marry her.

Fertility, marital felicity, devotion to the spouse, asceticism and power are different virtues symbolized by Parvati. These virtues are highly valued by the Hindu tradition. As per a famous literary work on the goddess, Saundarya Lahiri, Parvati is the source of all the power in this universe and Lord Shiva gets all his powers from her.