Valmiki was the author of Ramayana, one of the greatest epics of India. Know more about his life in this brief biography.
Home : Indian Literature : Sanskrit Literature : Poets : Valmiki 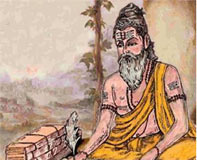 Perhaps the greatest poet India has ever had, the life history of Valmiki is a roller-coaster ride. The variations that this saint has had in life are beyond anyone's imagination. Born in the Naga clan, the details of Valmiki's life are not very clear as there no written records. He was the author of Ramayana, one of the greatest epics of India. The Ramayana tells the story of Prince Rama of Ayodhya who always stuck to his morals and emerged triumphant in the battle fought with demon king Ravana. The biography of Valmiki is an intriguing one and the exact dates of existence aren't known. Valmiki was not always a saint. He was an infamous bandit who killed many people by the time he reached his 30's. One day, he was touched by an act of love between two birds and that transformed his personality drastically. He realized the power of speech he had in him and the ability to create rhythmic verses. He then had a divine vision of Brahma, who urged Valmiki to use this potential to the maximum and write the story of Ramayana. Thus began the preparation of one of the most sacred and revered epics of India. The poetry and language used in Ramayana is commendable and unmatched. To know more about Valmiki, continue to read this insightful biography on him.

Personal Life
It is said that once Narada, a mythical sage, came to see Valmiki. Upon meeting him Valmiki asked him about 'an ideal man'. Narada told him the story of Ramayana to answer his question. It was on this story that Valmiki built up his epic 24,000 versed poetry. Valmiki got so attached to the story recited by Narada that he left for the river Tamasa along with his disciple Bharadwaj. He felt so peaceful and calm near the holy river that it helped him contemplate the modesty and maturity of his newly found hero. While he was feeling content and spiritual, he witnessed a gruesome deed. A hunter killed a bird which was engrossed in lover's play with its partner bird. This moved Valmiki beyond imagination. He felt a deep pang in his heart. Witnessing such grotesque cruelty anger came over Valmiki and he cursed the hunter. He said to him in the form of a curse that nobody will ever respect him in the society because he killed an innocent bird who was just involved in the act of love. But while cursing him he realized that he cursed him in the form of a 'sloka'. It was a metrical composition, perfect and rhythmic. This was the defining moment of his life, he turned into a poet. It was a combination of all the respect and love he felt for lord Rama and the tragedy he witnessed in the act of cruelty.

Major Work
Ramayana: It is said that Valmiki taught the Ramayana to the sons of Rama, Luv and Kush. He is also said to have given shelter to Sita after she was banished from the kingdom. The Ramayana is sung rather than just recited. Those who have read the Ramayana have bowed to Valmiki with great respect. It is said that when Luv and Kush were singing the Ramayana in their sweet voices in front Rama, he himself was unaware of the fact that they were his own sons! Though the epic is still there, there are no written records of Valmiki and his period of existence. Valmiki has in fact also got a small part in the actual Ramayana. When Ram along with his wife and brother is roaming around in exile in the jungle, Valmiki is one of the sages whom he visits on his way to Chitrakoot after leaving Ayuodhya. This elates Valmiki very much and he invites in Rama, Sita and Laxman with lots of respect and love. He only says one word to Rama--'asyatam', which means please be seated. He feels very touched and honored when Rama accepts his invitation and sits with him for a while. There is another occasion where Valmiki had a little role to play. When Rama sends Sita into exile then Valmiki takes her in his shelter and keeps her and her two sons under his loving care. When there is the epic recitation of the poem takes place in the royal court, Rama insists on inviting Valmiki to it and also asks Valmiki to bring along Sita for her chastity test. This offends Valmiki an awful lot but he does not say anything and keeps mum. He goes along the plan and persuades Sita to comply with her hsuband's wishes, even though internally he believed it to be a very wrong act from Rama's side. While Sita is made to take the chastity test by entering into the fire pyre, Valmiki recites the pious words of penance and perseverance that he has practiced all of his life just to help Sita prove her purity.