Raghuvamsa play is a literary magnum opus written by the famous poet Kalidasa. The play is synonymous with the creator and is often called Raghuvamsa Kalidasa. The play basically traces the roots of the great lineage of Lord Rama and his descendants and the great conqueror Raghu. Raghuvamsam basically talks about the valor and strength of the great warrior Raghu. It is the story of some of the great warrior kings ever born on the Indian soil. The most famous of them all is undoubtedly Lord Rama, whose story has been glorified in the great epic of Ramayana. To know more about this beautiful play called Raghuvamsa, continue to read this insightful article on it.

Synopsis
Raghuvamsa talks of the great emperor Raghu and his exploits and the battles he won. He led a military expedition to Transoxiana. Conquering anything and anyone who came in his path, he marches through central Asia and reached Vankshu, where a horrible battle was fought. The faces of the defeated were mutilated beyond disgust and it is said that this form of facial mutilation was widespread in Central Asia at that time.

After the Vankshu, Raghu and his army came across the Kambojas, who readily submitted to the valor of the great warrior and pleased him with gifts and rich treasures. The Kambojas are presumably the ancient people of Iran who are often referred to in ancient Indian texts. 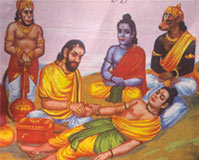 The growth of walnut trees is mentioned in the text and even today this region is known for its walnut cultivation.

It is believed that the literary figure of Raghu could have been inspired from Chandragupta Vikramaditya, as there are striking resemblances between the two conquerors. Chandragupta Vikramaditya himself gained much fame and respect by conquering many lands to spread the Gupta Empire. Kalidasa's Raghuvamsa gives immense adoration and fame to the Gupta rulers. The contribution of Raghuvamsa in Indian literature is indeed priceless and something that should be given prime importance.

Raghu was full of vigor and dexterity since he was a little boy. He once saved his father's horse. There was once a cut throat battle between Raghu and Indra go, during the time of Dileepa's one hundredth Ashwamedha sacrifice. Indra gets very astound with Raghu's courage and bless Dileepa. Dileepa gives the throne to Raghu and leaves for the forest to meditate and live the life of abstinence. Raghu being the hero that he was defeats ceveral kings and captures more and more land and spreads out his kingdom. He arranges for a great sacrificial yaga called the vishwajit yaga and gives away a large chunk of his accumulated wealth as charity. At that moment Kautsa, sone of a sage, comes and asks for his holy fees called the Gurudakshina. But King Raghu had already donated all of his wealth and possessions. He could only offer him some money but that was not enough for the sage's son. Knowing this, Raghu wages a war against Kubera, the god of wealth but Kubera agrees to help Raghu and gives him enough wealth to give Gurudakshina to Kautsa.

Then Raghu becomes a father of a son and he names him Aja. Aja was of peace-loving nature and tender looks. When he becomes the right age, he is sent for a Swayamvara. It was a ceremony in those times where the bride used to choose her own groom from a group of eligible bachelors. It was a Swayamvara of princess Indumati. Her maid Sunanda introduces all the princes to Indumati. She describes their looks, their strengths and their heroism. But none of them appeals to Indumati. Then finally Sunanda describes the grandeur and famous family of Aja. This appeals to Indumati a lot. She puts the marriage garland on his neck and accepts him as her husband. The other disappointed princes attack him and a big battle breaks out. Aja defeats everyone and brings his wife to his father's kingdom. His father honors his victory and hands over the kingdom to his son. After doing this Raghu leaves his kingdom altogether and goes to live like a hermit. He does that for years and in the meanwhile Aja earns everyone's appreciation. Once he is spending time with his wife in a garden outside his city, at the same time Lord Narada was crossing the heavenly path through the sky and a garland fell down from his hand and hits Indumati on the head and she collapses and breathes her last. This devastates Aja and he thinks that his wife's death has robbed him of everything in his life. After a few years time Aja hands over his kingdom to his young son Dasharatha. After that Aja commits suicide because he cannot bear to live without his wife. After this in the story Kalidasa mentions 28 other kings of the dynasty. It depicts the old traditional culture of our country.