Ramayana is one of the most read and famous epics of all times. Know more about the story of Ramayana.
Home : Indian Literature : Sanskrit Literature : Indian Epics : Ramayana

Ramayana is one of the most read and famous epics of all times. Maharshi Valmiki wrote the Ramayana epic. Every boy and girl in India knows the Ramayana story by heart. Every Hindu has the highest respect for this great epic, which is also given the status of a holy book. The flawless values and idealistic principles highlighted in the epic are something that is taught to every kid in a household. There are many local versions of Ramayana existing all across India. Many authors, all over India, have contributed in the process of coming up with various versions of this epic mythological story. Some of these versions are very different from each other. To get an in-depth knowledge on Ramayana, continue to read this insightful article on it.

Synopsis
Long time back, in the kingdom of Ayodhya, there lived a noble king known as Dashratha. He had three wives, but no children. After performing an elaborate Yagna to please Gods, he was granted with four sons. The eldest one was called Rama and was known for his idealist values and outlook. He is considered to be the seventh incarnation of Lord Vishnu. The king decided to crown Rama, as he was the rightful heir to the throne.

But the king's second wife, Kaikeyi grew jealous and she wanted her son to be the king. She reminded the king of a promise he gave her long back and made him announce that her son would be the king. Rama was exiled for a period of 14 years. Being the obedient son and an idealist, Rama obeyed his father and bid farewell to the kingdom and riches 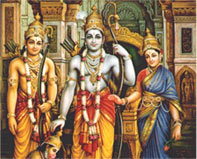 and donned the robes of an ascetic.

Thus set out Rama with Sita and Lakshmana on his 14 year long exile in the forests of India. Then one day, a Demoness saw Rama and was mesmerized by his charming personality. She tried to seduce him but he ignored her completely. She then tries to seduce Lakshmana, but enraged, he cuts off her nose. Thoroughly insulted, she goes back to her brother Ravana, the Demon king of Lanka and complains about what happened. Ravana seeks revenge by abducting Sita and captivating her in his palace. Determined and confident, Rama sets out to find her. He is helped by a group of monkeys who put in their best efforts to get Sita back from Lanka. Ravana is spoken of as a powerful demon, who was blessed by many Gods. His only flaw was vanity.

A battle ensued between the monkey army of Rama and the demon army of Ravana. In the end, Rama emerged victorious and was united with Sita. By this time, their exile had ended and they returned back to their kingdom victorious. Rama was crowned the king and he proved himself to be a devoted ruler. The moral of this epic is good always triumphs over evil. No matter what happens, one must never accept anything wrong and never deter from his path of duties of life.

Different Versions
The earliest version of Ramayana was written in 12th century AD. It was called Ramavatram and was written by a writer known as Kamban. It is still popularly known as Kambaramayanam in Tamil language. In the early 14th century it was translated into the Assamese language by an Assamese author known as Madhava Kandali. In 1576, Tulasidas penned down Sri Ramacharit Manas, inspired by Valmiki's Ramayana. It was written in the Awadhi language. It is the most popular and accepted version of Ramayana in India. It is commonly known as Tulsikrta Ramayana. In the 17th century a Gujarati version of this epic mythology was written by the author Premanand. In Bengali it was written by Krittivas, in the Oriya language by Balarama Das, in Maratha by Sindhara, in Kannada by Narahari (Called Torave Ramayana), in Malaylam by Tunccattu Ezhuttaccan, etc.

Mappillapattu, a folk song from the Muslim community of Kerala and Lakshadweep, is in a dialect of Malayalam called Mappilla and also has traces of Arabic in it. It also has words from languages like Persian, Urdu, Tamil, Hindi, etc. It is a local song on religion, courage, community love and is sung by Muslims of these communities during auspicious ceremonies and occasions. This song is famous for its usage of Ramayana's story in it.

There exists a Buddhist version of the story of Ramayana as well. In this version, instead of Ayodhya Dasaratha was shown a s the king of the holy city of Benares. There was also no mention of Sita's abduction in the Buddhist version of Ramayana, which effectively means that Ravana had no role to play in it as well. The story revolves around the fact that Dasaratha in the feeling of protectiveness for his two sons Rama and Lakshamana against the cruel nature of his second wife, sends them in exile to the Himalayas.