Kalidasa is one of the greatest Sanskrit poets that India has ever had. Know more about his life in this brief biography.
Home : Indian Literature : Sanskrit Literature : Poets : Kalidasa

One of the greatest Sanskrit poets that India has ever had, the life history of Kalidasa is absolutely fascinating and interesting. Though the exact time of his fame is not known, it is estimated that he survived around the middle of the 4th or 5th century A.D. This is roughly the period of the reign of the famous Chandragupta, the successor of Kumaragupta. The biography of the great Indian poet Kalidasa provides us with an immense amount of detailed information about the places he traveled and the kind of life he led. To know more about Kalidasa, continue to read this insightful biography on him.

Personal Life
The poems he wrote were usually of epic proportions and were written in classical Sanskrit. His creations were used for fine arts like music and dance. Regarded as an outstanding writer, Kalidasa resided at the palace of Chandragupta in Pataliputra (modern day Patna). He was one of the gems of the court of Chandragupta. According to legends, Kalidasa was blessed with good looks. This attracted a princess with whom he fell in love. Since Kalidas was not too good in intellect and wit, the princess rejected him. 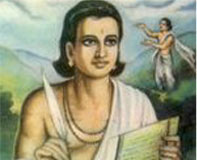 He then worshipped Goddess Kali and she blessed him with intellect and wit, thus making him one of the "nine gems" in the court of Chandragupta.

Major Work
Shakuntalam: Perhaps the most famous and beautiful work of Kalidasa is the Shakuntalam. It is the second play of Kalidasa after he wrote Malavikagnimitra. The Shakuntalam tells the story of king Dushyant who falls in love with a beautiful girl Shakuntala, who happens to be the daughter of a saint. They get married and lead a happy life until one day, the king is asked to travel somewhere. In his absence, a sage curses Shakuntala as she offends him unknowingly by not acknowledging his presence. Due to the curse, Dushyant's entire memory is wiped off and he doesn't remember his marriage or Shakuntala. But the sage feels pity for her and gives a solution that he will remember everything if he sees the ring given to her by Dushyant. But she loses the ring one day in the river while bathing. After a series of incidents, a fisherman who finds the ring inside a fish rushes to the king with the ring. The king then recalls everything and rushes to Shakuntala to apologize for his actions. She forgives him and they live happily ever after.

Kalidasa also wrote two epic poems called Kumaarasambhava, which means birth of Kumara and the Raghuvamsha, which means dynasty of Raghu. There are also two lyric poems written by Kalidasa known as Meghadutta that stands for cloud messenger and the Ritusamhara that means description of the seasons. Meghadutta is one of the finest works of Kalidasa in terms of world literature. The beauty of the continuity in flawless Sanskrit is unmatched till date.

Few Verses From The Meghadutta
On Rama's shady peak where hermits roam,
Mid streams by Sita's bathing sanctified,
An erring Yaksha made his hapless home,
Doomed by his master humbly to abide,
And spend a long, long year of absence from his bride.

Some months were gone: the lonely lover's pain
Had loosed his golden bracelet day by day,
Ere he beheld the harbinger of rain,
A clous that charged the epak in mimic fray,
As an elephant attacks a bank of earth in play.

Before this causes lover's hopes and fears,
Long time Kubera's bondman sadly bowed,
In meditation, choking doen his tears ---
Even happy hearts thrill strangely to the cloud,
To him, poor wretch, the loved embrace was disallowed.

Longing to save his darling's life; unblest,
With joyous tidings, through the rainy days,
He plucked fresh blossoms for his cloudy guest,
Such homage as a welcoming comrade pays,
And bravely spoke brave words of greeting and of praise.

Nor did it pass the lovelorn Yaksha's mind,
How all unfitly might his message mate,
With a cloud, mere fire and water, smoke and wind --
Ne'er yet was lover could discriminate,
'Twixt life and lifeless things, in his love-blinded state.

I know, he said, thy far-framed princely line,
Thy state, in heaven's imperial council chief,
Thy changing forms; to thee, such fate is mine,
I come a suppliant in my widowed grief--
Better thy lordly 'no' than meaner souls' relief.

O cloud, the parching spirit stirs thy pity;
My bride is far, though royal wrath and might;
Bring her my message to the Yaksha city,
Rich-gardened Alaka, where radiance bright,
From Shiva's crescent bathes the palaces in light.

When thou art risen to airy paths of heaven,
Through lifted curls the wanderer's love shall peep,
And bless the sight of thee for comfort given;
Who leaves his bride through cloudy days to weep,
Except he be like me, whom chains of bondage keep?

While favoring breezes waft thee gently forth,
And while upon thy left the plover sings,
His proud, sweet song, the cranes who know thy worth,
Will meet thee in the sky on the joyful wings,
And for delights anticipated join their rings….