The novel plan for the introduction of a rail system, transformed the whole history of India. This innovative plan was first proposed in 1832; however no auxiliary actions were taken for over a decade. In the year 1844, private entrepreneurs were allowed to launch a rail system by Lord Hardinge, who was the Governor-General of India. By the year 1845, two companies were formed and the East India Company was requested to support them in the matter.

The credit from the UK investors led to the hasty construction of a rail system over the next few years. On 22nd Dec' 1851, the first train came on the track to carry the construction material at Roorkee in India. With a passage of one and a half years, the first passenger train service was introduced between Bori Bunder, Bombay and Thana on the providential date 16th Apr' 1853. This rail track covered a distance of 34 kms (21 miles). Ever since its origin, the rail service in India never turned back.

The British Government approached private investors and persuaded them to join the race with a system that would promise an annual return of 5% during the early years of operation. Once finished, the company would be transferred under the Government ownership, yet the operational control will be enjoyed by the original company. In 1880, the rail network acquired a route mileage of about 14,500 km (9,000 miles), mostly working through Bombay, Madras and Calcutta (three major port cities). 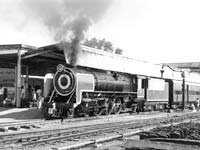 By 1895, India had started manufacturing its own locomotives. In no time, different kingdoms assembled their independent rail systems and the network extended to the regions including Assam, Rajasthan and Andhra Pradesh. In 1901, a Railway Board was formed though the administrative power was reserved for the Viceroy, Lord Curzon. The Railway Board worked under the guidance of the Deptt of Commerce and Industry. It was comprised of three members - a Chairman, a Railway Manager and an Agent respectively.

For the very first time in its history, the Railways instigated to draw a neat profit. In 1907, most of the rail companies were came under the government control. Subsequently, the first electric locomotive emerged in the next year. During the First World War, the railways were exclusively used by the British. In view of the War, the condition of railways became miserable. In 1920, the Government captured the administration of the Railways and the linkage between the funding of the Railways and other governmental revenues was detached.

With the Second World War, the railways got incapacitated since the trains were diverted to the Middle East. On the occasion of India's Independence in 1947, the maximum share of the railways went under the terrain of Pakistan. On the whole, 42 independent railway systems with thirty-two lines were merged in a single unit and were acknowledged as Indian Railways. The existing rail networks were forfeited for zones in 1951 and 6 zones were formed in 1952. With 1985, the diesel and electric locomotives took the place of steam locomotives. In 1995, the whole railway reservation system was rationalized with computerization.