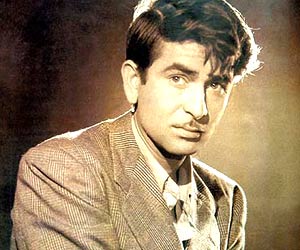 Raj Kapoor started his career as a clap boy assisting Kidar Sharma. In 1935, at the age of eleven, Raj Kapoor appeared in his first film Inquilab. In 1946, Raj Kapoor married Krishna Malhotra, his aunt and his father's second cousin. Raj Kapoor's big break came in 1947, when he played leading role in the film Neel Kamal, directed by Kidar Sharma. In 1948, at the age of twenty-four, Raj Kapoor established his own studio, R. K. Films, and became the youngest film director of his time. His first movie as a director was Aag (Fire). The film was an instant success.

Thereafter, Raj Kapoor directed several films. He also acted in most of them. Some of the famous films directed by Raj Kapoor are Barsaat (1949), Awaara (1951), Shri 420 (1955), and Sangam (1964). He formed a hit pair with Nargis. Raj Kapoor depicted the story of common man in his films and his films appealed to every section of the society. Raj Kapoor had great sense of music and the music of his films was very popular not only in India but in countries like Russia too. Film historians have characterized Raj Kapoor as the "Charlie Chaplin of India," since he often himself played a tramp-like figure who, despite adversity, could still be cheerful and honest.

After the commercial failure of his ambitious film Mera Naam Joker in 1970, Raj Kapoor's films took a turn toward sensuality. In 1973, Raj Kapoor released Bobby, which started the trend of teenage romance in Indian cinema. He introduced Dimple Kapadia in Bobby who later went on to become a mega star. The film showed Dimple Kapadia in bikini, which was a bold attempt considering societal standards at that point of time. He further pushed the boundaries of sensuality in his other films like Satyam Shivam Sundaram (1978) and Ram Teri Ganga Maili (1985). Raj Kapoor's film carried social message too. For example, his film Premrog (1982) advocated widow remarriage.

For his contribution to Indian cinema Raj Kapoor was honored with Dadasaheb Phalke Award in 1987. He died on June 2, 1988 due to asthma related complications. At the time of his death he was working on the film Henna, based on a love story between an Indian boy and Pakistani girl .The film was later completed by his son Randhir Kapoor and was a major commercial success.