Given here is the biography of Indian actress Madhubala that will brief you on the life history and works of Madhubala.
Home : Famous Indians : India Film Personalities : Madhubala 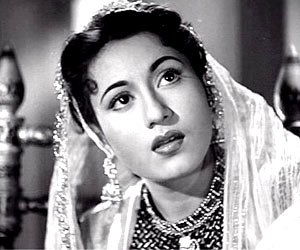 Madhubala (February 14, 1933 - February 23, 1969) is one of the most gorgeous actresses to have graced the screens of Bollywood. She has made an incredible contribution to the Indian film industry. Well, in this article, we will present you with the biography of Indian actress Madhubala. We will also provide you with information on the works of Madhubala.

Early life
Born as Mumtaz Jehan Begum Dehlavi on the February 14, 1933, Madhubala was the fifth child of the Pashtun Muslim family. A Muslim holy man had once predicted that this girl would make a name for herself and become a prominent personality. She would earn loads of wealth and fortune, but unfortunately won't be able to enjoy a happy life and die at a very young age. To know the complete life history of Madhubala, read on…

Madhubala is an epitome of beauty, who had an unbeatable charm. She is admired for her looks and work even by the present day generations. Madhubala's father named Ataullah Khan, on hearing the words of the Muslim holy man, planned to migrate to Bombay (now Mumbai) for leading a better life. Things were not smooth and the family had to struggle a lot for a year. Madhubala entered into the Indian film industry as a child artist. At that time, she was known as Baby Mumtaz.

Early work
Mumtaz gave a fabulous performance in her maiden film Basant (1942). Devika Rani was amazed by her performance and talent and changed her name to Madhubala. In the movie Jwar Bhata (1944), she was to play the lead role with Dilip Kumar. But, things did not materialize and she could not work in the film. But, this gave her an opportunity to know Dilip Kumar.

Major Break
Madhubala got a major break, when she was signed opposite to Raj Kapoor in Kidar Sharma's film 'Neel Kamal' (1947). She was more often referred to as the "Venus of the Screen". Within a span of two years, she established her career and came into limelight. She constantly kept climbing the ladders of success and her films were super hit. Mughal-e-Azam turned out to be the biggest hit. In her short lifetime, she worked in seventy films.

Relationship with Dilip Kumar
Madhubala and Dilip Kumar got an opportunity to get along with each other on the set of Jwar Bhatta (1944). When they worked together in Mughal-e-Azam for a long period of nine years, Madhubala started having hots for him. It is even said that, Madhubala had once sent him a note accompanied by a flower. Dilip Kumar reacted in a favorable manner and they got engaged with each other. Madhubala was very serious about marrying him, but he did not pay much of attention on her and chose someone else for marriage. Later, Madhubala got married to Kishore Kumar, a well known name of the Indian film industry.

Death
In a routine check up, it was discovered that Madhubala had a hole in her heart. Her ailment was kept secretive from the film industry. The doctors refused to operate on her, as there was virtually no hope of survival. The doctors said that even if the operation is successful, she won't live for more than a year. It was at that point of time that, she realized that she shouldn't have married Kishore Kumar. She passed away on the February 23, 1969.