Emperor Jahangir strengthened the Mughal Empire in India after his father Akbar. Jahangir was born on 31st August, 1569 and was named Nuruddin Salim Jahangir. Nuruddin has been derived from Arabic which means "light of faith". Jahangir is a Persian word which means "world conqueror". Jahangir was an able administrator who had a penchant for the finer things in life. He was not a brutal warrior but a learned politician. Read this short biography to know the life history of Mughal Emperor Jehangir.

Jahangir received the best education that was available at that time. His father Akbar was very particular that his son received the best education that was available in the kingdom. At the age of four he was taught Turkish, Urdu, Persian, Arabic, Arithmetic, Geography, History, Sciences, etc. At a very young age, he was given the rank of a Mansabdar of ten thousand, which is the highest rank in military after the Emperor. At the mere age of twelve, he commanded a regiment independently in the Kabul campaign. 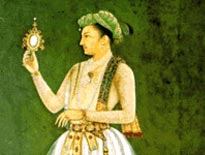 Emperor Jahangir married many times and the girls were from very high-class noble families of the Mughals and Rajputs. A Rajput princess known as Jagat Gosain was his favorite and she gave birth to Shah Jahan, Jahangir's successor. He also married the famous Noor Jahan, who was the widow of Sher Afghan. Noor Jahan was supposed to be unparalleled in beauty and intelligence. This was the reason why Jahangir was attracted towards her. She proved to be the driving force behind Jahangir and made him strengthen the empire.

Jahangir loved fine arts and encouraged the growth the poetry, paintings, dance, music, etc. He was also a good writer and loved nature. He penned down his life and his experiences in the form of an autobiography named Tuzk-e-Jahangiri. He was a collector of paintings and many of them are still preserved in a museum. He was famous for his "Chain of Justice", which was a golden chain attached to some bells outside his palace. Anyone in despair could pull the chain and go in for a personal hearing from the emperor himself. Jahangir died in the year 1627 and was buried in a magnificent tomb at a place called Shahdra, located in present day Pakistan.