Emperor Shah Jahan was the fifth Mughal ruler of India. He was born on 5th January, 1592 and it is said that during the reign of Shah Jahan, the Mughal Empire prospered greatly like never before. The name Shah Jahan has been derived from Persian and it means "Emperor of the World". He was named Prince Khurram and ascended the throne at the age of 35. This short biography given here presents the life history of emperor Shahjahan.

Shah Jahan was an able ruler and an efficient administrator and aimed at spreading the extent of Mughal Empire. Shah Jahan was a devout Muslim and unlike his grandfather Akbar, he was not tolerant towards Hindus. He ordered that Hindu temples that were being constructed should be destroyed. He was also not a supporter of other religions and also demolished the churches of Christians located at Agra and Lahore. Shah Jahan also attacked a Portuguese colony located near Calcutta as the Portuguese were charged with crimes like kidnapping Mughal subjects and shipping them to Europe as slaves. 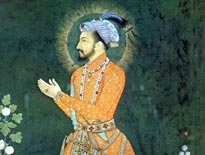 Shah Jahan was a lover of art and architecture and took care of even the minutest detail in any construction that he ordered. The most famous example of his architectural style is the Taj Mahal. The Taj Mahal was built in the memory of his second wife Mumtaz Mahal who died while giving birth to his 14th child. She was a devoted lady and accompanied Shah Jahan to each and every military expedition he went. When she died, Shah Jahan was devastated and locked himself in a room. It is said that when Shah Jahan emerged from the room he looked a hundred years old and had become very fragile.

Taj Mahal was built with utmost dedication and care. The pure white marble was carefully cut and carved to make up this wonderful dream in marble. The walls were decorated with verses from the Quran and the monument was studded with precious and semi-precious stones all over. When Taj Mahal was completed, everyone was awestruck. Other famous monuments he made are Jama Masjid and Red Fort located at Delhi. A famous mosque that he built was the Pearl Mosque located at Agra.

Shah Jahan lived an opulent life. He built the Peacock Throne which was made out of gold and precious stones. The legs were made of solid gold and 12 pillars of emeralds supported an emerald canopy. Each pillar was intricately carved with two peacocks that were studded with rubies and diamonds and from between the peacocks emerged a tree which was covered in diamonds, rubies and pearls. Shah Jahan took care of every minute detail and during his reign jewelry was refined to very high level of perfection.

Shah Jahan was captured by his own son Aurangzeb and was locked away in a fort during the battle for succession to the throne among his sons. Shah Jahan was a helpless spectator as he was too old and weak to put up a fight against the army of his son. While on his death bed, his eyes were fixed on the Taj Mahal and when he died, he was buried in the magnificent tomb next to his wife.