Here is given the biography of the well known freedom fighter Rani Lakshmi Bai of Jhansi. Check out the life history of Rani Laxmi Bai.
Home : Famous Indians : Others : Rani Lakshmi Bai 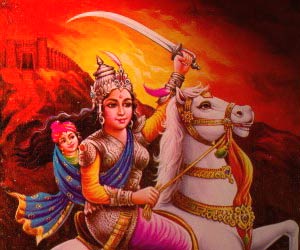 Rani Lakshmi Bai was the queen of the princely state of Jhansi, which is located on the northern side of India. She was one of the most leading personalities of the first war of India's independence that started in 1857. In this article, we will present you with the biography of Rani Lakshmibai, who was an epitome of bravery and courage.

Early Life
She was born to a Maharashtrian family at Kashi (now Varanasi) in the year 1828. During her childhood, she was called by the name Manikarnika. Affectionately, her family members called her Manu. At a tender age of four, she lost her mother. As a result, the responsibility of raising her fell upon her father. While pursuing studies, she also took formal training in martial arts, which included horse riding, shooting and fencing. To know the complete life history of Rani Laxmibai of Jhansi, read on.

In the year 1842, she got married to the Maharaja of Jhansi, Raja Gangadhar Rao Niwalkar. On getting married, she was given the name Lakshmi Bai. Her wedding ceremony was held at the Ganesh temple, located in the old city of Jhansi. In the year 1851, she gave birth to a son. Unfortunately, the child did not survive more than four months.

In the year 1853, Gangadhar Rao fell sick and became very weak. So, the couple decided to adopt a child. To ensure that the British do not raise an issue over the adoption, Lakshmibai got this adoption witnessed by the local British representatives. On 21st November 1853, Maharaja Gangadhar Rao died.

Invasion
During that period, Lord Dalhousie was the Governor General of British India. The adopted child was named Damodar Rao. As per the Hindu tradition, he was their legal heir. However, the British rulers refused to accept him as the legal heir. As per the Doctrine of Lapse, Lord Dalhousie decided to seize the state of Jhansi. Rani Lakshmibai went to a British lawyer and consulted him. Thereafter, she filed an appeal for the hearing of her case in London. But, her plea was rejected. The British authorities confiscated the state jewels. Also, an order was passed asking the Rani to leave Jhansi fort and move to the Rani Mahal in Jhansi. Laxmibai was firm about protecting the state of Jhansi.

The war
Jhansi became the focal point of uprising. Rani of Jhansi began to strengthen her position. By seeking the support of others, she formed a volunteer army. The army not just consisted of the men folk, but the women were also actively involved. Women were also given military training to fight a battle. In the revolt, Rani Lakshmibai was accompanied by her generals.

From the period between Sep-Oct 1857, Rani defended Jhansi from being invaded by the armies of the neighboring rajas of Orchha and Datia. In January 1858, the British army headed it's away towards Jhansi. The conflict went on for two weeks. Finally, the Britishers succeeded in the annexation of the city. However, Rani Laksmi Bai managed to escape along with her son, in the guise of a man.

She took refuge in Kalpi, where she met Tatya Tope, a great warrior. She died on 17thJune, during the battle for Gwalior. It is believed that, when she was lying unconscious in the battle field, a Brahmin found her and brought her to an ashram, where she died. For her immense effort, she is referred to as the 'Icon of the Indian Nationalist Movement'. Throughout the uprising, the aim of Rani was to secure the throne for her adopted son Damodar. Her story became a beacon for the upcoming generations of freedom fighters.

Lot of literature has been written on the life history of Rani Lakshmibai of Jhansi. Heroic poems have been composed in her honor.