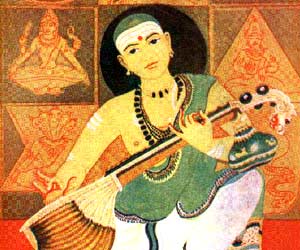 Born - 1775
Died - 1835
Achievements - Muthuswami Dikshitar was an exponent of the South Indian Carnatic music genre. He created about 500 compositions in total, most of which are widely sung by renowned musicians in Carnatic music performances even today.

As per the accounts of Subbarama Dikshitar, her son was born in the manmatha year in the month of Panguni under the asterism Krittikaa. And that he was named after the deity of the temple, Muttukumaraswamy. Muthuswami Dikshitar had two sibling brothers Baluswami and Chinnaswami as well as a sister named Balambal. He created about 500 compositions in total, most of which are widely sung by renowned musicians in Carnatic music performances even today.

A number of the compositions made by Muthuswami Dikshitar are in the Sanskrit language. They have been couched in the Krithi style i.e. a format in which the poetry is set to music. Throughout the course of his life history, Muttuswami Dikshitar toured a number of holy places in the country. And he's said to have composed Krithis on various deities and temples he visited. The most unique feature about the compositions of Dikshitar is that each one is brilliantly created.

Each and every of the 500 compositions he's made is not only melodious but also full of depth. Though his Sanskrit compositions are themed on the temple gods and goddesses, yet all of them talk about the concept of advaitin i.e. the one with a form. These songs penned by Muthuswami Dikshitar talk much about the history of the temples and the customs and traditions observed within its precincts. Thus, they also serve as valuable source of historical information.