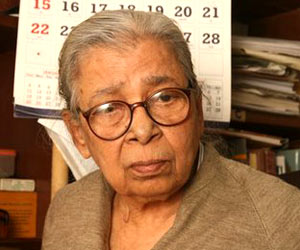 Born - 1926
Achievements - Mahasweta Devi is an eminent Indian Bengali writer, who has been studying and writing incessantly about the life and struggles faced by the tribal communities in the states like Bihar, West Bengal, Madhya Pradesh and Chhattisgarh.

Mahasweta Devi is a reputed Indian writer who was born in the year 1926 into a middle class Bengali family at Dacca, which is located in present day Bangladesh. She received her education from the prestigious Shantiniketan set up by great Indian philosopher and thinker, Rabindranath Tagore that went on to become a part of the Visva Bharti University later on. Mahasweta Devi graduated from the University of Calcutta and this was followed by an MA degree in English from the Visva Bharti University.

Read on to know more about the biography of Mahasweta Devi. Since her entire family had shifted to India by now, Devi began teaching at the Bijoygarh College in 1964. In those times, this particular college was a forum operating for elite female students. This phase was also utilized by Mahasweta Devi to work as a journalist and a creative writer. Of late, Mahasweta Devi is known to have been studying the life history of rural tribal communities in the Indian state of West Bengal and also women and dalits.

Mahasweta Devi is a social activist who has wholly involved herself to work for the struggles of the tribal people in states like Bihar, Madhya Pradesh and Chhattisgarh. In the fiction themed on Bengal which Devi writes, she often narrates the brutal oppression faced by the tribal people at the hands of the powerful upper caste persons comprising landlords, money lenders and government officials in this belt.

During the 2006 Frankfurt Book Fair when India happened to be the first country to have been invited to this fair for a second time, Mahasweta Devi made a very touching inaugural speech which moved many among the listeners to tears. Inspired by the famous Raj Kapoor song, she said: "This is truly the age where the Joota (shoe) is Japani (Japanese), Patloon (pants) is Englistani (British), the Topi (hat) is Roosi (Russian), But the Dil (heart) is always Hindustani (Indian)"