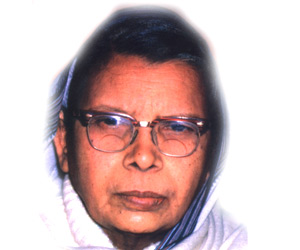 She is a well known Hindi poet of the Chhayavaad generation, the times when every poet used to incorporate romanticism in their poetry. She is more often called the modern Meera. Well, we are talking about the famous Mahadevi Varma, who achieved the Jnanpith award in the year 1982. In this article, we will present you with the biography of Mahadevi Varma, so read on.

Life History
Mahadevi was born in the family of lawyers in 1907 in Farrukhabad, Uttar Pradesh. She completed her education in Jabalpur, Madhya Pradesh. At a young age of seven in the year 1914, she was married to Dr Swarup Narain Varma. She lived with her parents till the time her husband completed his studies in Lucknow. It is during this period that, Mahadevi pursued further education at the Allahabad University. She did her masters in Sanskrit from there.

She met her husband for sometime in the princely state of Tamkoi somewhere around 1920. Thereafter, she moved to Allahabad to further her interest in poetry. Unfortunately, she and her husband mostly lived separately and were busy pursuing their individual interests. They used to meet occasionally. Her husband died in the year 1966. Then, she decided to permanently shift to Allahabad.

She was highly influenced by the values preached by the Buddhist culture. She was so much inclined towards Buddhism that, she even attempted to become a Buddhist bhikshuni. With the establishment of Allahabad (Prayag) Mahila Vidyapeeth, which was primarily set up to impart cultural values to girls, she became the first headmistress of the institute. This famous personality died in 1987.

Writings
Mahadevi Varma is one amongst the other major poets of the Chhayavaadi school of the Hindi literature. She is the epitome of child prodigy. Not only she wrote fabulous poetry, but also made sketches for her poetic works such as Deepshikha and Yatra. Deepshikha is one of the best works of Mahadevi Varma. She is also famous for her book of memoirs.

Honors
Her writings were well acclaimed and earned her an important position in the world of Hindi literature. She is believed to be one of the supporting pillars of the Chaayavad movement. Her amazing poetry collection Yama brought her the Gyanpeeth award (1940), the highest Indian literary award. In the year 1956, the Government of India honored her by conferring the title of Padma Bhushan upon her. She was the first Indian woman to become a Fellow of the Sahitya Akademi in the year 1979.