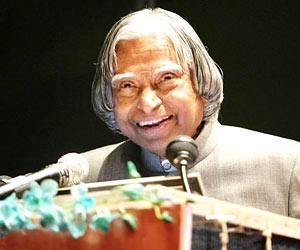 Avul Pakir Jainulabdeen “A. P. J.” Abdul Kalam was a scientist and engineer, who served as the President of India from 2002 to 2007. Already a highly accomplished and much respected individual when elected to be the president, Kalam had spent four decades as a scientist and science administrator at several prestigious organizations like the Defence Research and Development Organisation (DRDO) and Indian Space Research Organisation (ISRO). Born into a family of humble means in Tamil Nadu, Kalam went on to study aerospace engineering in Madras Institute of Technology. His initial dream was to become a fighter pilot but he failed to qualify for the Indian Air Force. He then started working at the Defence Research and Development Organisation (DRDO) as a scientist and was later transferred to the Indian Space Research Organisation (ISRO). Eventually he was appointed as the Chief Scientific Adviser to the Prime Minister and in this position he played a key role in the Pokharan II nuclear tests. He became the President of India in 2002 and was known as the People's President. He left the office after serving one term and became professor of Aerospace Engineering at Anna University and a visiting professor at several other institutions.

Childhood & Early Life
Abdul Kalam was born as the youngest of five children of a Muslim boat owner named Jainulabudeen and his wife Ashiamma, in Rameswaram, Tamil Nadu. His ancestors had once been wealthy traders though his family lost much of its fortunes by the early 20th century. Kalam grew up in humble surroundings and had to take up a job while he was still in school in order to augment his family’s meager income—he distributed newspapers to help his father in providing for the family. He was a bright young boy, blessed with a thirst for knowledge and was always eager to learn new things. He completed his schooling from Ramanathapuram Schwartz Matriculation School and proceeded to study physics at the Saint Joseph's College, Tiruchirappalli, from where he graduated in 1954. Then he studied aerospace engineering in Madras Institute of Technology, graduating in 1960. His childhood ambition was to become a fighter pilot but he narrowly missed achieving his dream.

Career at DRDO
After completing his studies he joined the Aeronautical Development Establishment of the Defence Research and Development Organisation (DRDO) as a scientist. One of the first projects he worked on was to design a small helicopter for the Indian Army. He also got the opportunity to work with the renowned space scientist, Vikram Sarabhai as a part of the INCOSPAR committee. However, Kalam was not much satisfied with his career at the DRDO.

Career at ISRO
Kalam was transferred to the Indian Space Research Organisation (ISRO) in 1969 as the project director of India's first Satellite Launch Vehicle (SLV-III). An expandable rocket project on which he had started working independently in 1965 got the government’s approval for expansion in 1969. Over the next several years he developed the Polar Satellite Launch Vehicle (PSLV) and SLV-III projects, both of which proved to be successful. In the 1970s he also worked on the development of ballistic missiles from the technology of the successful SLV program and directed the projects Project Devil and Project Valiant which were aimed at producing a short-range surface-to-air missile. Even though the projects were discontinued in 1980 without achieving full success, they earned Kalam great respect and admiration from the scientific fraternity.

Return to DRDO
In 1980s, the government decided to initiate an advanced missile program under his directorship and thus the Integrated Guided Missile Development Program (IGMDP) was launched with Kalam as the chief executive. The program which aimed at the research and development of a comprehensive range of missiles started in 1982-83. Under the able guidance of Kalam, several missiles including Agni, an intermediate range ballistic missile and Prithvi, the tactical surface-to-surface missile, were developed.

Presidency
Kalam stood for presidency in 2002 and easily won the 2002 presidential election. He had the support of both the ruling Bharatiya Janata Party and the opposition Indian National Congress and was sworn in as the 11th president of the Republic of India on 25 July 2002. He was the first scientist to occupy Rashtrapati Bhawan. He was a popular president who was much respected by the citizens of the country. However, he was also criticized for his inaction in deciding the fate of the majority of the mercy petitions submitted to him during his tenure. He also kindled controversy with his decision to impose President's Rule in Bihar in 2005. At the end of his term he decided not to contest the Presidential election again and stepped down on 25 July 2007.

Awards and Honors
A. P. J. Abdul Kalam has been honored with several prestigious awards from the Government of India including the Padma Bhushan in 1981, the Padma Vibhushan in 1990, and the Bharat Ratna in 1997. He was also the recipient of the Von Braun Award (2013) from the National Space Society "to recognize excellence in the management and leadership of a space-related project". Following his death, the Tamil Nadu state government announced that his birthday, 15 October, would be observed across the state as "Youth Renaissance Day".

Personal Life
Kalam was a life-long bachelor. He had four elder siblings—one sister and three brothers—with whom he had close relations. He was a very simple person with just a few personal possessions.

Death
He remained active until the last day of his life. He was scheduled to deliver a lecture at the Indian Institute of Management Shillong on 27 July 2015. Only five minutes into his lecture, he collapsed and was rushed to the Bethany Hospital where he was confirmed dead of a sudden cardiac arrest. His last rites were performed in his hometown, Rameswaram.

1960: Joined the Aeronautical Development Establishment of the Defence Research and Development Organisation (DRDO)

1992: Appointed the Chief Scientific Adviser to the Prime Minister and the Secretary of the Defence Research and Development Organisation

2007: Stepped down from the presidency of India

2012: Launched a programme for the youth of India called the ‘What Can I Give Movement’