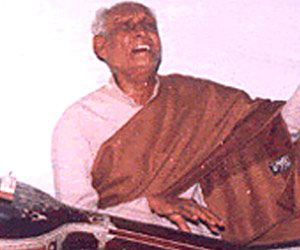 Born - 1922
Died - 2005
Achievements - An eminent Indian Hindustani classical music stalwart, late Pt. Vishwanath Rao Ringe is credited for composing as many as 2000 bandishs in about 200 ragas. Due to this reason, his name was enlisted in the prestigious Limca Book of Records.

Throughout his life history Pt. Vishwanath Rao Ringe composed over 2000 compositions in about 200 ragas and different taals like Ektal, Deepchandi, Tritala, Tilwada, Chanchar, Dadra, Keharva, Jhaptala, Ada-Choutal, Roopak and so on. Pt Ringe had made a Raga Hemashri, which he recited at a programme of the All India Radio. Some of his compositions include Bada Khyal, Chota Khyal, Chaturang, Tarana, Sadra, Sargam, Tillana and Sur Sagar. Pt. Vishwanath Rao Ringe passed away at the age of 83 at his residence in Indore, Madhya Pradesh.