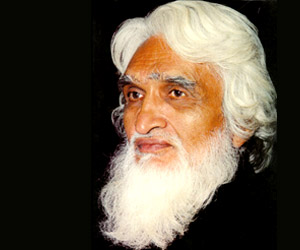 It wouldn't be wrong to say that painting was the life and soul of MF Husain. Blessed with one of the best gifts of God - art, Husain knew exactly how to make paintings speak for themselves. Over his tenure as a painter, he is claimed to have painted about 60, 000 paintings in topics as diverse as Mohandas K. Gandhi, Mother Teresa, the Ramayana, the Mahabharata, the British Raj, and motifs of Indian urban and rural life. Maqbool Fida Husain, popularly known as MF Husain, was, indeed, one of the prominent figures that India ever gave birth to. Known for his vigorous appreciation of God's creations, particularly humans, he went on to create some masterpieces, to be remembered for lifetime. Such was his scrutiny that he could portray circumstances and situations even with a pencil sketch. He is considered to be one such individual who blended ethnic and mythological themes to come up with luminous and incredible art forms.

Early Life
Born in 1915, MF Husain came from a traditional Muslim background. He was born in Pandharpur, Bombay Presidency in British India. His mother, Zunaib died when he was one and a half years old. Thereafter, his father, Fida remarried a girl named Shireen and shifted to Indore. Husain was extremely close to his grandfather, from whom he drew his major inspiration. Unfortunately, his grandfather could not accompany him for long as he passed away when Husain was just 6. Husain's formal education began at Sidhpur in Gujarat where he underwent 2 years of rigorous training in Indian religions. From here, he was transferred to an Islamic boarding school, Darul Talaba in Baroda. However, owing to his miserable performance, his father apprenticed him to a tailor and later to a draughtsman, hoping that he would pick up a profession. Interestingly, his father was very supportive towards his love for art. Seeing his possession and passion for art, he even gifted him an Agfa box camera. When Husain was just 16, his father rented a room in the neighboring house where Husain could paint in complete privacy. He gained interest in English literature, courtesy his neighbor, Yavar, from where he started reading Shakespeare, John Ruskin, and books on British painters.

Early Career Life
In 1935, Husain moved to Mumbai for the first time at the age of 20 and took admission in J.J. School of Arts. He earned his living by painting cinema hoardings and whenever he managed to save some money, he used to travel to Baroda, Surat, and Ahmedabad to paint landscapes. Since painting hoardings did not give him much of an earning, he tried his luck in other jobs. Amongst them, working at the toy factory proved to be the best paying job, where he was engaged in designing and building fretwork toys. After struggling and experiencing hardships for years in Mumbai, Husain finally received recognition in the late 1940s. Though in 1944, he received an offer from Fantasy for designing children's furniture and later in 1947 from Kamdars, a famous design company, his initial love remained painting.

Career as a Painter
In 1947, Husain's painting 'Sunhera Sansaar' was exhibited at Bombay Art Society for the first time. The same year saw India's independence, after which, he decided to stay back in India. Soon after, Progressive Artists' Group (PAG) was formed by the artist Francis Newton Souza. Husain was amongst the early members and became the secretary of the group in 1949. This was just the first step towards the historic success that Husain went on to make later on. His first solo exhibition was held in Zurich in 1952, followed by a series of successful exhibitions across Europe and US. In 1971, he was sent a special invitation along with the legendary Pablo Picasso at the Sao Paulo Biennial. He was nominated at the Rajya Sabha for a term in 1986.

Career as a Filmmaker
Besides earning the title of the most eminent and highest paid Indian painter, Husain also tried his hand at film direction. His first film 'Through the Eyes of a Painter' produced in 1967 was victorious in bagging the Golden Bear at the Berlin Film Festival. Husain was so obsessed with the stunning Bollywood actress Madhuri Dixit that he considered her as his muse. He even went ahead to make a film with her, titled 'Gaja Gamini' in 2000. Besides, Dixit remained the subject of his numerous paintings, which he titled 'Fida'. Apart from Dixit, Husain also made a film titled 'Meenaxi: A Tale of Three Cities' with Tabu, another Bollywood artiste, in 2004. Amrita Rao and Anushka Sharma are couple of other Bollywood actress who had cast a charm on Husain.

Controversies
Husain was not just renowned for his exemplary paintings and portrayal of human figures, but he was also the center of controversies. His nude portraits of Hindu gods and goddesses or in an allegedly sexual manner captured a lot of eyeballs but all for the wrong reasons. Although the paintings were created in 1970, they did not become an issue till 1996, until they were published in a Hindi monthly magazine, Vichar Mimansa. The very instant response resulted in eight criminal complaints against Husain on the pretext of promoting enmity between Hindu goddesses, Durga and Saraswati, which was dismissed by Delhi High Court. Later in 1998, Hindu groups, like Bajrang Dal attacked his house and destroyed his paintings. The extent of the protests was such intense that his exhibition due in London was called off.

In 2004, after the release of his film 'Meenaxi: A Tale of Three Cities' starring Tabu, he was objected by some Muslim organizations for using words directly from the Holy Quran in the Qawwali song 'Noor-un-Ala-Noor'. As a result, the movie was removed from cinema halls, just a day after its release. The complaint, lodged by the All-India Ulema Council, was supported by other Muslim organizations, such as the Milli Council, All-India Muslim Council, Raza Academy, Jamiat-ul-Ulema-e-Hind, and Jamat-e-Islami.

Yet again in February 2006, Husain again became the talk of the town when he again painted Bharatmata (Mother India) as a nude woman across the map of India with different Indian state names on various parts of the body. This nude portrayal was highly objected by Hindu Jagriti Samiti and Vishva Hindu Parishad, which resulted in the issue of a non-bailable warrant. Although Husain apologized and withdrew the painting from the auction, the painting was published on his official website. He left India in 2006 and went on a self-imposed exile, settling in Dubai. Later in 2010, he was offered the citizenship of Qatar, which he readily agreed. Thereafter, he had divided his time between homes in Qatar and London.

Awards & Recognition
Husain had been honored with India's three most prestigious civilian awards, Padma Shree in 1955, Padma Bhushan in 1973, and Padma Vibhushan in 1991, for his distinguished contribution in the field of art. His 'Battle of Ganga and Jamuna: Mahabharata 12' successfully fetched $ 1.6 million in 2008, a world record at Christie's South Asian Modern and Contemporary Art sale. The same year, he was presented with the esteemed Raja Ravi Verma award by the Government of Kerala. He was also fortunate enough to have his name included in the list of '500 Most Influential Muslims in the World', released by the Royal Islamic Strategic Studies Center, Amman, Jordan.

Personal Life
Husain married Mehmoodabibi's daughter, Fazila on March 11th, 1941 in the presence of his father and some close friends. His wife was a constant support and inspiration who encouraged him to be firm in his beliefs.

Death
Being unwell for over a month, Husain died of a heart attack in London. He breathed his last at the Royal Brompton Hospital on June 9, 2011; thus, bringing an end to the tenure of a genius and Picasso of India. His body was kept at Idara-e-Jaaferiya, a funeral parlor at Tooting, to let the public pay their homage to the legendary painter. He was buried on June 10, 2011 at the Brookwood Cemetery at Woking in Surrey, at the city's outskirts.