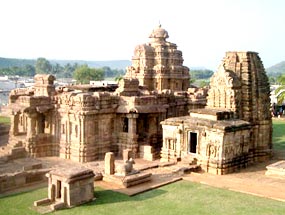 Pattadakal is a beautiful city situated in the state of Karnataka. In the past, it was a part of the Chalukya Dynasty and it was during their rule that the city managed to attain an amazing blend of architectural styles belonging to the northern and the southern parts of India. Forming a part of the Pattadakal Temples are nine Hindu temples as well as a Jain temple. The sculptural art adorning the temples is characterized by elegance and elaboration.

The narrative art of the temples depicts different episodes from the great Hindu epics like Ramayana and Mahabharata, the holy book Bhagavata Purana as well as the tales of Panchatantra. Four Hindu temples at Pattadakal have been built as per South Indian Dravidian architectural style. Four others are based on the Nagara architectural style of North India. While, the architecture of the ninth and the last, known as the Papanatha Temple, comes across as a combination of different styles.

Virupaksha Temple
Virupaksha Temple was built somewhere around 740 AD, by Queen Lokamaha Devi. The main reason behind the construction of the temple was to commemorate the victory of Lokamaha's husband, Vikaramaditya II, over the kings from the south.

Jambulinga Temple
Jambulinga Temple is a small temple, which enshrines an exquisite image of Dancing Lord Shiva, with Goddess Parvati and Nandi Bull by His side. It has been built with a northern style tower, which has a horseshoe-arched projection on its facade.

Jain Temple
The Jain temple is situated on the Pattadakal-Badami Road, approximately half a kilometer from the temple enclosure. A ninth century temple, it has been built in the Dravidian style and stands adorned with some stunning sculptures