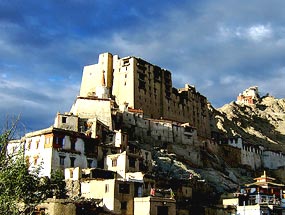 The most popular attraction of Ladakh, apart from its numerous monasteries, is the Leh Palace. The ruined palace comes across as a mesmerizing piece of architecture and is visited by tourists in large numbers. Leh Palace is perched at the edge of the Namgyal hill and overlooks the entire Leh town below. The palace was constructed in the 17th century, to serve as the residence of King Singge Namgyal. It is quite similar in appearance to the Potala in Lhasa, though it is much smaller in size.

Leh Palace of India comprises of nine stories in toto. It has been deserted since the 1830s, when the royal families of Ladakh were exiled to the Stok Palace. Years of neglect have resulted in the palace being reduced to ruins. Towering above the Leh palace is a huge tower, known as the 'Victory Tower', which was built to celebrate the victory of the Ladakhi soldiers in the early 16th century, over the attacking army of Balti Kashmiris. However, the canon balls fired by the Kashmiris have left the palace quite weak.

Presently, Leh Palace has been converted into an office for Indian Government's archaeological conservation organization. It has been built as per the medieval Tibetan architectural style. The walls of the palace are huge and inclined, while the wooden balconies seem to be protruding. The flaking murals of Leh Palace serve as a window to the erstwhile grandeur and magnificence of the ruined apartments. The fourth story of the palace houses the Dukhar temple, which enshrines thousand-armed image of its deity, Goddess Tara.