Swamp Deer, also known as Barasingha, is one of the most vulnerable species of deer of the Indian subcontinent as well as the world. Presently, one can find them only in the protected sanctuaries of India. Known by the scientific name of Cervus duvauceli, the swamp deep of India derives its name, Barasingha, from its large antlers. An adult male swamp deer has huge antlers, which branch to over twelve points. This led to it being named as Barasingha in Hindi, meaning the 12- antlered deer.

Physical Traits
Swamp deer is a medium sized deer, which grows to a maximum height of 130 cm and weighs around 180 kg. Its thick brown coat helps it in remaining warm and dry in the moist habitat it resides in. As the mating season approaches, the coat of the Barasingha becomes darker in color. A male deer has huge antlers, which can grow to length of 75 cm. 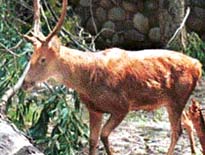 Barasingha can be seen grazing both in the daytime as well as at night. They usually move around in groups, known as herds, consisting of ten to twenty members. However, the size of a herd keeps on changing, depending upon the time of the year. As the breeding or mating season comes, the number of members in a herd goes as high as sixty. The dominance over a herd of female deer is established by a fight amongst the male barasingha.

Mating Behavior
The mating season of the swamp deer falls in the months of November and December. Their gestation period is around 6 months and they usually give birth to only a single young one. Indian barasingha prefer to give birth in tall grass, where it is possible for them to conceal their baby from predators. They have an acute sense of smell and it serves as their best defense against their hunters.

Natural Habitat
One can find swamp deer in areas with tall grasses or in the reed beds near rivers. They prefer to stay in marshes or swamplands. In the India subcontinent, Barasinghas can be found occupying the forested areas in the Gangetic and Brahmaputra basins.

Geographical Range
At one point of time, Bara Singha used to inhabit most of the areas of northern as well as central India. However, today their habitat has been restricted to the protected forests of Uttar Pradesh, Assam and Madhya Pradesh only. Infact, the population of Barasingha has decreased the world over and now their count is less than 5000 worldwide. Swamp deer of India can be further subdivided into three subspecies.

Diet
Barasinghas are basically herbivores. Their staple diet mainly consists of grass and leaves. The wetland subspecies of Barasingha can also be seen eating aquatic plants. Since they graze in early morning and evening, it is the best time to spot them.

Status and Threats
Swamp deer occupies a place in the list of the endangered species of the world. Deforestation, along with the draining of swamps and marshes for farming, has led to the destruction of their natural habitat. At the same time, Barasinghas are hunted for their horns. Last but not the least, they catch diseases from the domestic cattle, which has lead to their death and a decline in their population.

National Parks
One can find the Swamp deer in the following national parks of India:
Facts about Indian Swamp Deer