Sambar Deer are dark brown in color and attain a height of 102 cm to 160 cm (40 to 63 inches). The weight of the sambar deer of India may touch 300 kg. There are chestnut marks on the rump as well as the underparts. Sambur deer of India also have beautiful manes. However, they are not spotted by birth. The spots develop gradually after birth. Sambhur deer have huge antlers, which may grow to a length of upto 100 cm (40 inches). The antlers are rugged and have simple brow tines, along with forked beams at the tip. These antlers are dropped by the deer on an annual basis.

Behavior
Indian sambar deer typically display solitary and isolated behavior. Most of the time, they are seen roaming alone. In case they have company, it is that of a very small group. The senses of sambar deer are highly developed, which helps them in detecting their predators easily. Whenever they perceive danger, they start giving a repetitive honking alarm call. 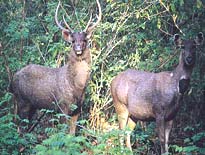 Sambar deer are found inhabiting mainly damp woodland environments of the Indian subcontinent, like marshes and swamps. One can hardly find them residing far from water, but they can be found at high elevations also. The other natural habitat of the Sambar deer comprises of Indian temperate forests. Apart from India, Sambhur deer is found in the slopes of the Himalayan Mountains, Burma, Thailand, Indochina, the Malay Peninsula, southern China, Taiwan and the islands of Sumatra and Borneo in Indonesia.

Diet
Sambur deer of India are herbivores and survive on a diet consisting of coarse vegetation, grass, and herbs. Their staple diet includes grass, sprigs, fruits and bamboo buds.

Mating Behavior
The mating period of the Indian sambhur deer falls in the month of November/December. The male deer guard their rutting territories and try to attract the female deer through vocal and olfactory displays. The gestation period of sambar deer is approximately 6 months and, usually, they give birth to a single offspring only.