Musk deer comprise of one of the most endangered deer species, not only in the Indian subcontinent, but also in the whole world. They are classified as a subfamily of the Cervidae and have four sub-species, namely:
Physical Traits
Musk deer of India resemble medium-high dogs in size. They weigh just about 9 to 11 kg and are very different from the other types of Indian deer. The hind legs are quite muscular as well as long and the forelimbs are short, weak and thin. The small and arched back make the musk deer higher at the sacrum than at the shoulders. This also helps them in taking well-coordinated jumps from their hind legs. The musk deer, both make as well as female, do not have antlers. 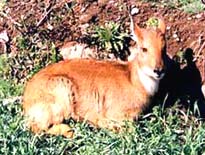 The canines of the males stick out downward from the mouth and are larger than those of the females. The coat of newborn musk deer is dark brown in color and is covered with short, soft hair. They also have yellowish or white spots on their coat. As the second winter of a young one approaches, it gets covered with a winter coat, with coarse hair and less defined or absent spots. Male musk deer have a musk pouch, which is situated between their sex organs and navel. Whenever they want to attract a mate, they release a scent from this pouch.

Behavior
Indian musk deer tend to be very secretive. They can be found either living alone or in groups, consisting of not more than three members. Each group generally comprises of a mother and her young ones. One can see them in the early morning, late evening or at night. During snowfall, they become lethargic, climb trees and eat tree shrubs and moss to survive.

Natural Habitat
The most preferred habitat of the musk deer in India comprises of pockets with rock outcrops, which serve as a shelter from their predators. As winter season approaches, musk deer move to steep slopes, full of coniferous trees. In summers, they like to stay in valleys with forest rivers or around streams or near fields with good grassy vegetation. Marshy forests do not count amongst the favorite habitat of the musk deer. Their geographical range covers forested, mountainous parts of Asia and parts of Eastern Russia.

Diet:
Musk deer are herbivores and are known to consume over 130 species of plants. They also consume a few mosses and lichens. In winter season, Musk deer eat mainly arboreal lichens and some terrestrial bushy lichens. Other consumption items include young shoots, coniferous needles, leaves, buds, bark of mountain ash, aspens, maple, willow, bird cherry, and honeysuckle. In summers, herbaceous plants, including buckwheat, geranium, some grasses, and spirea, form a major portion of their diet.

Mating Behavior
The mating season of Musk deer of India is in December and lasts for a period of 3 to 4 weeks. The gestation period is somewhere between 185 and 195 days. The number of offspring is mostly one and seldom reaches two. Secluded places are chosen for fawning and the young one stays with the mother for upto two years (two winters).

Status and Threats
Musk deer is the most endangered of all the species of deer. One of the main reasons for this is that they are highly poached for their musk. The main predators of the Musk deer include lynx, wolverine, and the yellow-throated marten.