Muntjac deer fall in the category of those deer that are shy and elusive. They are also known by the name of Kakad deer or the Barking deer in India. The reason for the latter name is their alarm call, which seems very much similar to the barking of a dog. Indian Muntjac deer counts amongst the ten subspecies of the Barking deer in the world.

Physical Traits
The height of the barking deer of India is somewhere between 50 cm to 75 cm. Their average lifespan is 20 to 30 years and they weigh somewhere around 20 to 30 kg. They can be easily distinguished from the other deer. The deer have two raised dark ridges on their forehead, which extend till their antlers. One of the unique features of Kakad deer is that they have both, a pair of antlers as well as overgrown canines (tushes). They make use of the tushes mainly as weapons in a fight. 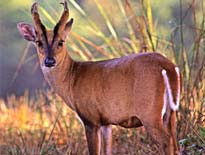 Kakad deer are very shy creatures and prefer to live in isolation. One rarely finds them moving around in groups. Even if you find them in company, it will not be more than that of a single deer. The alarm call of a Muntjac deer is taken seriously only when it is repeated endlessly.

Diet
The low height and small stature of Indian Muntjac deer make grass and fallen fruits the perfect food for them.

Natural Habitat
The Barking deer are mostly seen inhabiting dense forests of India. Even while grazing, they will rarely move into open grasslands and usually remain near the edge of dense forests. However, one can frequently find the Muntjac deer of India at salt licks. Apart from the Kalesar forest of Haryana, they are found in almost all the dense jungles of the Indian subcontinent.

Status
Barking deer is still not counted amongst the endangered species. Nevertheless, the government has imposed a ban on their hunting.