Hog Deer is a subspecies of deer, found in the areas stretching from Pakistan, through northern India, to mainland Southeast Asia. A population of the Hog deer was introduced in a number of countries, including Australia, United States and Sri Lanka. The hog deer of India has been named after the manner in which it runs. While running, its head is hung low, which helps it in ducking the obstacles in the way, rather than leaping over them.

Physical Traits
Hog deer is a small animal, which reaches a shoulder height of approximately 60 cm. Counted amongst the smallest deer of the world, it weighs somewhere between 20 to 30 kg. A male hog deer has beautiful antlers, with a 3 points formation. Shed in spring season, these antlers can grow to an average length of 30 cm. While running, the tail of a hog deer gets erect, revealing the white underside. 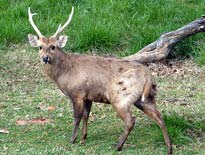 Hog deer of India are mainly solitary creatures and turn into sociable creatures only when the situation seems to be favorable. Whenever they get startled, they whistle or bark as warning signal. Hog deer have their own home ranges, which widely vary in size. A male hog deer is aggressive and may form territorial boundaries, even at low population density.

Mating Behavior
Mating period of Indian Hog deer falls during the months of autumn, usually September. The gestation period is of 8 months. When the mating period approaches, male deer gather in the open and indulge in antagonistic encounters. At a particular point of time, a male fights over a single female only. Hog deer do not give mating calls like other deer.

Status
Hog deer has still not been listed as an endangered species. It may live upto an age of 20 - 30 years, if not hunted by its natural predators.
Diet
The diet of a Hog deer comprises primarily of grass.

Natural Habitat
Grasslands across the plains and low foothills of northern of form the natural habitat of the Hog deer. They can also be seen in the alluvial grass plains of the Indian subcontinent.