Brow-antlered deer are known by the scientific name of Cervus eldii. They have a number of other names also, like Eld's Deer, Sangai Deer, Thamin Deer and even Dancing Deer. The maximum lifespan of the Thamin deer of India is only ten years and the deer has three subspecies also. These include the following:
Physical Traits
Sangai deer of India are medium in size and are very much like the Barasingha in appearance. Long thin legs, a long body and a large head on a thin neck further define their looks. The coat of the Eld's deer of India changes in color from season to season. In summers, it reddish-brown in color while in winters, it turns into dark brown. The texture is coarse and rough, especially around the throat, where the growth is quite long. There is a difference between the male and female Thamin deer. Male deer have a darker color and a shorter tail. 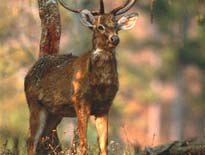 The most remarkable feature of male Dancing deer comprises of their antlers. They are usually multi-tined and can grow as long as 2 meters. The average number of tines is 12. However, in exceptional cases, it can go upto 20. The antlers of the male Brow-antlered deer have lyre shape and they tend to grow backwards in a long arc. The brow tine is exceptionally long and noticeable, one of the reasons for the deer to be named as the Brow-antlered Deer.

Status and Threats
The population of Sangai deer of India has been continuously deceasing over the past years. It is believed that the population of the Manipur Brow-antlered deer is somewhere around 200 only. One can find about 2000 to 3000 Burmese Thamin deer in various locations of Myanmar. Though the number of Thailand Eld's deer is not known exactly, it is believed to be quite low. One of the main reasons for the diminishing population of the Sangai deer of India is too much hunting. The destruction of their habitat further has further worsened the situation.

Natural Habitat
Dancing Deer prefer to stay in open Indian parkland areas or light woodland, which are near to rivers or wet marshy land. One can hardly find them in thick forest or woodland.

Diet
Thamin deer are herbivorous and survive on a variety of water plants, grasses, herbaceous plants, and shoots.

Mating Behavior
The mating season of the Eld's deer of India begins in February and comes to an end in May. The control over a group of female deer is established through a competition between the males. The gestation period lies between 220 and 240 days, after which the female gives birth to, usually, a single calf. Indian Sangai deer are spotted by birth. However, as the calf grows, the spots fade away. The age of maturity is around 18 months.

Behavior
Indian brow-antlered deer have been known to move in separate sex herds, which may become as large as comprising of upto 50 members. When the mating period approaches, stags join the female groups.