Axis Deer, also known as Chital Deer or Spotted Deer, is the native animal of the Indian subcontinent. It is found very commonly in India and is one of the most beautiful animals in the country. The spotted deer of India was introduced in the state of Texas in the 1930s. Since that time, it has become the most widespread of the entire deer species. Chital deer are found mostly in large family units, where a doe remains with her mother even after becoming a mother herself. Spotted deer can be seen roaming around either in mixed groups or separate bachelor groups.

Physical Traits
The spotted deer of India has a beautiful golden brown coat, which is covered with big white spots. On an average, a male deer (known as stag) grows to a shoulder height of somewhere between 85cm and 90cm. The weight of a stag averages around 80 kg. Does are shorter as well as lighter. The coat of an adult deer has brighter spots as compared to that of fawns. At the same time, the white throat patch of a stag is more prominent than that of a doe.

The antlers of the axis deer of India branch to six points and sweep back into an upward curve. They shed their antlers on an annual basis. Mostly, the antlers of Indian chital deer grow to a length of 20 inches. Only some deer have antlers that reach 30 inches. An Indian spotted deer, whose anglers were 41 inches long, still holds the record for having the longest antlers in the world. 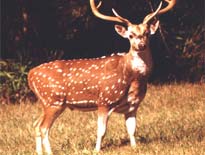 The natural habitat of the Chital Deer comprises of Indian parkland habitats, with open woodland in grassy areas. They prefer to live near rivers and other sources of water. In rare cases, they may inhabit thick forests.

Behavior
Axis deer is a very introverted as well as reticent animal. Gregarious by nature, it is found living in small herds comprising of 20 to 30 animals. In rare cases, the number of animals in a herd may go upto 100. A few dominant individuals dominate the group, leaving the others to will feed and rest. As male chital deer start growing older, they become more and more isolated.

Mating Behavior
The mating behavior of the axis deer is quite different from the other deer. They do not follow any seasonal rut and fawning can occur in any month. Infact, one can find them in hard horn and in velvet at the same time, that to during any time of the year. Spotted deer is also not seen wallowing during rut. Rather, it emits a shrill call, proudly displaying its beautiful antlers. The gestation period is 220 days, after which a single young one is born.

Status
Chital deer have still not faced too much threat and are far away from the risk of extinction. However, they are being hunted at a rapid pace and are even losing their habitat to humans, who are using it for agricultural as well as residential purposes. If this continues unabated, there is a possibility that the population of Indian spotted deer may become threatened in the future.