Painted stork is a tropical species, belonging to the stork family of Ciconiidae. The bird is found in the Asian continent, covering the area from India and Sri Lanka to Southeast Asia. Broad-winged soaring birds, the Painted storks of India fly with their neck outstretched. They are resident birds and are found in Indian lowland wetlands, with trees.

Physical Traits
The Painted stork of India is a tall and slim bird, which grows to a height of 95 to 100 cm. The bird is mostly white in color, with the exception of its wings and chest feathers that have black and white markings. The color of the lower back, along with the legs, is light pink. The head of the Painted storks is only partly covered with feathers and is orange in color.

The bill is long, yellow in color and curves towards the end. The female Painted stork is a little smaller than the male. The young ones are brownish in color when they hatch. Only after they become three years old, do they get adult feathers or plumage. Full maturity comes around the age of four years. 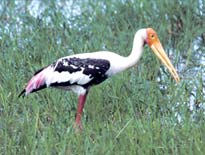 Painted storks of India prefer to eat fish, which also forms a major portion of their diet. However, at times, they consume frogs and snails also. When hunting, the stork puts its head inside the water, with its bill being partly open. The bird keeps swinging its head back and forth in the water, till it catches a prey.

Status
Painted stork bird of India has a place in the list of protected species, at the moment.

Predators
The predators of Painted stork of India include tigers, leopards, jungle cats, hyenas and crocodiles.

Behavior
Painted Storks are found mostly in large colonies and stay near water. The nests, made up of sticks and leaves, are built close to the edge of the water. One can see other stork species, like herons, ibises, cormorants and spoonbills, sharing the habitat with Painted storks. Till 18 months of age, the young ones can make loud calls to attract their parents. However, after this, they lose their speech and use other signals to convey something to their fellow birds.

Mating Behavior
The breeding season of the Painted stork starts towards the end of the rainy season. The mating period is the time for the male storks to perform ritualistic displays and attract females. After mating, the nest is built and the female lays around 3 to 5 eggs. The incubation period is between 27 and 32 days and the responsibility is shared by the both the parents. The young ones become fully matured when they attain four years of age.

Senses
The most important as well as the most developed senses of the Painted stork comprise of its eyesight and hearing. The young ones communicate through loud hoarse call. However, after attaining 18 moths of age, the style of communication changes to clattering of large bills or hissing or bowing to each other or spreading the wings, etc.