Black-necked stork is a large bird, known scientifically as Ephippiorhynchus asiaticus. It belongs to the Ciconiidae family and counts amongst the huge wading birds of the Indian subcontinent. Black-necked stork is a resident bird of southern Asia and Australasia. The area inhabited by Black-necked storks stretches on from India east to New Guinea and the northern half of Australia. Just like numerous other storks, they also fly with their neck outstretched.

Physical Traits
Black-necked stork is a massive bird, which stands tall at a height of around 130 to 150 cm. The bird is spectacularly plumaged and the wingspan is somewhere around 230 cm. Leaving the head, neck, wing bar and tail area, which is black in color, the plumage is purely white. The beak is huge and is black in color, while, the legs are bright red. The only difference between a male and female Black-necked stork is that the male has a brown iris, while the female has a yellow one. The young ones are light brown in color, contrasted with a white belly and dark legs. 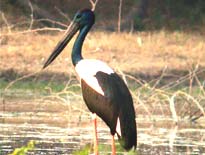 Indian Marshes, along with other wetlands, in tropical lowland, make up the natural habitat of Black-necked stork.

Mating Behavior
For the purpose of breeding, Black-necked storks build the nest in trees. The female stork lays three to five eggs at a time.

Diet
The diet of a Black necked stork mainly consists of fish, frogs and large insects. The bird may eat young birds, lizards and rodents also.

Status
Black Necked Storks of India have been listed as 'Near Threatened' on the IUCN Red List of Threatened Species. The environmental changes, like water pollution, habitat destruction, etc, are one of the main reasons attributed to their declining population.