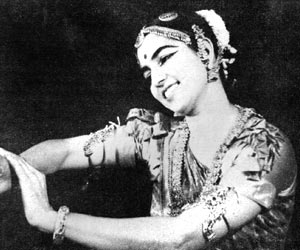 Born -1904
Died - 1986
Achievements - At a time when the Bharata Natyam was considered a low and vulgar dance in India, Rukmini Devi Arundale mastered this art form in order to popularize it during early 1920s. Later as a part of Annie Besant's Theosophical Movement, Rukmini Devi traveled all over the world as an ambassador of Indian culture. She was also nominated the Rajya Sabha member twice.

All through her life, Rukmini Devi Arundale pursued Indian classical dancing as passionately as she could in order to revive and reestablish India's several arts and crafts. Belonging from an educated elite upper caste Indian family, Rukmini Devi Arundale dedicated her entire life to popularize the Bharata Natyam, which was considered a low and vulgar art in India during the early twenties. She recognized the beauty and spiritual value of this art form and summoned the courage to learn it herself despite strong public protest.

Read on to know more about the impressive biography of Rukmini Devi Arundale, who went to later marry well-known British Theosophist Dr. George Arundale. This too was alienation from the traditional Indian customs and there was a huge public outcry over it. But she faced it all with a brave heart. The course of her life history took a major turn when Rukmini Devi Arundale was drawn towards the Theosophical Movement as a follower of social activist Dr Annie Besant.

As a member working for the Theosophical movement, Rukmini Devi traveled all over the world as an ambassador of Indian culture. She went on to set up the Besant Theosophical High School and the Besant Arundale Senior Secondary School to impart education based on traditional Indian values later on. In the year 1936, Rukmini Devi established the Kalakshetra as a cultural organization dedicated to the preservation of traditional values in Indian art.

Rukmini Devi was appointed a member of the upper house of the Indian Parliament i.e. the Rajya Sabha in April 1952. She was re-nominated for the same post in the year 1956. Another thing that interested Rukmini Devi Arundale was the welfare of animals and she used to work with a number of organizations for this purpose. Infact, as a Rajya Sabha member, Rukmini Devi was largely responsible for the legislation for the Prevention of Cruelty to Animals Act (1960).