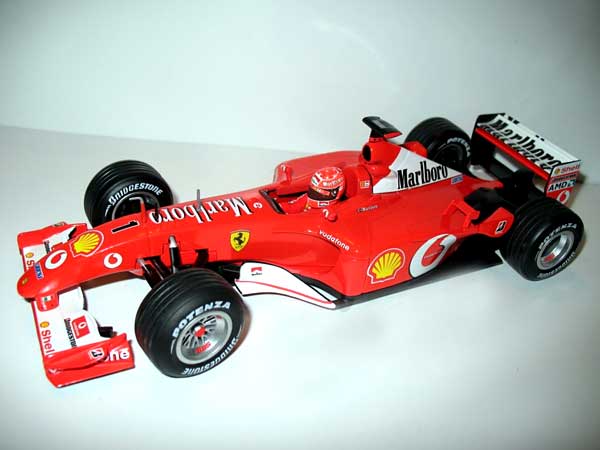 Ross Brawn and Rory Byrne designed Ferrari F2001, a highly successful Formula 1 for 2001 racing season. Because of new regulations, the aerodynamics of the car had to be redesigned and as a result F2001 had a lower nose, a higher front wing and longer flanks. The traction and launch control system were reintroduced in Ferrari F2001 and the car's suspension was designed accordingly.

Systems
The designers took clew from McLaren way of designing a car. Ferrari trademarks like periscope exhausts and small bargeboards were of course featured, but McLaren style things also found a place. The basic gearbox and internal layout was unchanged. The car’s front and rear suspension system had pushrod-activated torsion spring. It used seven-speed longitudinal semi-automatic sequential gearbox. Ventilated carbon fibre discs were used which were more effective than the normal ones. Weight of the vehicle with water, lubricant and driver did not exceed 600kg.

Record
Ferrari F2001 had an exemplary record in its career. It took 10 wins, 13 pole positions, 4 fastest laps and 197 points. Schumacher, the legendary driver, took the car's final win in the Australian Grand Prix before it was replaced by the all conquering F2002 from the third race.

Engine
Ferrari F 2001 used rear-mounted Ferrari 050 Normally Aspirated 90-degree V10. The engine had aluminum alloy block and head, and it was mid, longitudinally mounted. A naturally aspirated engine, it was fed Magnetti-Marelli Fuel injection. The valvetrain was 4 valves / cylinder, DOHC and the displacement was 2.997 liter / 182.9 cu in.
Transmission
Chassis
Dimensions and Weight