Indian heron belongs is a member of the large wading bird family, known as Ardeidae. It is found mostly inhabiting the tropical and sub tropical areas. However, heron birds of India can also be seen in temperate areas. There is one major characteristic that distinguishes herons from the other birds. Unlike other birds, when they fly, their necks get folded back on their shoulders.

Most of the time, the herons of India come across as a solitary creature, hunting and feeding alone. Nevertheless, they can be found roosting and nesting in large colonies, known as heronries. In the following lines, we have provided information on the various subspecies of the Heron bird, found in India: 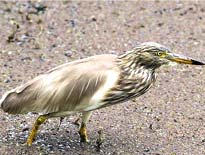 Night heron belongs to the Nycticorax and Gorsachius genera. It is a medium sized bird, which is mainly found in the tropical regions of the Indian subcontinent. The name 'Night Heron' is derived on the basis of the fact that these birds prefer to catch their prey during night. More.

Pond Heron
Pond herons are one of the most commonly found species of the Indian subcontinent. Docile by nature, they can be seen in their natural habitat as well as on the outskirts of villages. The first description related to the Pond heron bird was given in the year 1832, by Colonel W. H. Sykes. The bird belongs to the Old World species and is scientifically known as Ardeola grayii. More.