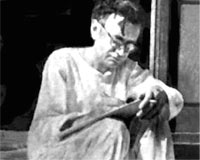 Saadat Hasan Manto was an acclaimed but a controversial South Asian literary figure. He was born in Sambrala, in the Ludhiana district of the Punjab in the year 1912. As a young man, Manto began his literary career with an Urdu translation of Victor Hugo's The Last Days of a Condemned Man. Going through his works it is pretty evident that during the starting of his career; Manto was deeply influenced by French and Russian realist writers such as Hugo, Anton Chekhov and Maxim Gorky. During the 1930s, Manto was also peripherally involved with the Indian Progressive Writers Association. IPWA was a left-leaning literary movement that was committed to the ideals of social uplift and justice through literature.

Major Work
During his career, Manto wrote more than two hundred stories and a number of essays, film scripts, and radio plays. However, his greatest contributions to Indian literature were his mastery of the short story genre and his use of the Urdu language. Some of his well-known Urdu short stories include Bu, Khol Do, Thanda Gosht, and Toba Tek Singh, that were promptly translated into English after Manto's death.

Manto, throughout his lifetime, remained cross with the social and literary founding of his times. His writing was considered to be bold and obscene and various charges were put on him where he was literally brought to trial in India and Pakistan. But he did not yield to all this malarkey. He remained insubordinate and unrepentant. In fact, he infuriated the authorities by writing more literary stuff on the god-men, politicians and the heads of the society. There were people who thought that he was a lunatic and everything he said or did was distasteful and there were other kind of people who thought that he was just a very explicit and provocative writer. But there were other kind of people who considered him to be the greatest Urdu writer of all times. His stories were dark and represented the tainted side of the human psyche but it was very much realistic and is relevant to all times and generations. He has openly written about the haunting violence during the time of partition that both the people of Pakistan and India face. He attacked the political system of that time, which supported partition, in his writing. He not only projected the victims of the hate crime in a sad light but he also presented the people who resorted to violence as the victims of a devious political system. He already felt isolated from the society but the criticism and admonish for his explicit and honest writing that he used to receive made him more and more cynical about human nature and society. He did not consider anything as taboo and acknowledged all the hidden aspects of the society. He has even written about the sexual hypocrisy of the society by bringing the stories of the prostitutes and pimps on the forefront. He was dead against the concept of sexual slavery of women. Many women writers have appreciated Manto's capability to portray the plight of women in sexual slavery in his times quite honest and realistic. He is generally compared to D.H. Lawrence in his writing style as both of these writers used to write about the taboos of their respective societies with directness and without any inhibitions. When Manto was blamed for the profanity in his writings, he said, “If you cannot bear these stories then you must know that the society is also unbearable. Who am I to remove the clothes of the society, which itself is naked? I do not even try to cover it, because it is not my job that is the job of the dressmakers of the society.'”

Death
Towards the later stage of his life, it is said that Manto became much stressed and lost his usual witty charm. He used to take part in the literary functions and recite his stories but he looked like he lost the will to do it. He could not take the criticism about him or his writing in good stride anymore and used to shout back at his critics.

After the partition of India, Manto left his home in Mumbai and migrated to Lahore, Pakistan, in January 1948. Although Manto's last years in Pakistan were filled with financial hardship and failing health, they were also instrumental in the compilation of some of his greatest literary achievements. Manto died of excessive drinking of the substandard alcohol that led to liver cirrhosis, in the year 1955. He was only 42 years old at the time of his death and left behind his wife Safiyah and three young daughters. His death has left a vacuum in the South Asian Literature genre that is still vacant.